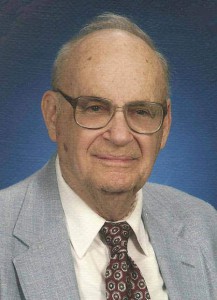 Dr. Jacques was born Oct. 9, 1915 to the late Archie and Georgianna (Chamberlain) Jacques in Somersworth, N.H. As a young man, he played piano professionally in a dance band. He studied at the University of New Hampshire and then Georgetown Medical School, which he graduated from in 1941.

Shortly thereafter, he enlisted as a captain in the U.S. Army Medical Corps. He initially served in the Aleutian Islands Campaign in the North Pacific. Following the Allied invasion of Europe, he served in France and Germany with the 36th Armored Infantry Regiment.

Dr. Jacques spent the next five decades of his life working as a psychiatrist for the Massachusetts Department of Mental Health.

He met his future wife, the late Margaret (Noe) Jacques, while both were working at Grafton State Hospital. Margaret was working a summer job fresh out of college. Eleven years his junior, she stood out to Dr. Jacques as “the smartest girl in town.” They married Oct. 12, 1949, and raised five children while living on the grounds of the hospital where they met. Although they had to move from the hospital when it closed in 1973, Leo and Margaret spent the rest of their lives living in Grafton.

After Grafton State Hospital closed, Dr. Jacques assisted with the state’s transition to community-based mental health care by helping to establish mental health clinics around Southern Worcester County. He worked in several of these clinics until he retired in 1993.

Dr. Jacques was passionate for the outdoors and hiked frequently in the White Mountains. He maintained excellent health late into his life, skiing and biking well into his 80s when Margaret’s illness limited his own activity.

He and Margaret travelled throughout Asia, the Middle East, Europe, and North America. They also spent many summers on Cape Cod and owned a small cottage in Wellfleet.

Dr. Jacques spent more than 10 of the later years of his life caring for Margaret when she became ill, much of it without professional assistance. Because of Jacques’ care and devotion, Margaret was able to live at home until only several months before she died in 2012.

He is survived by his children, Alan R. of Knoxville, Tenn., Paul F. and his wife Mary Ellen of Maynard, Carol J. Trembley and her husband Paul of Valencia, Calif., David L. and his wife Lemesa of Nashville, Tenn., and John R and his wife Sherri of Richmond, R.I.; his grandchildren, Matthew, Benjamin, Nicholas, Jesse, Andrew, Henry, and Nola Rose; a niece, Roberta Howard; a nephew, Hubert Jacques; and a sister-in-law, Connie Jacques, all of Florida.

The family asks that in lieu of flowers you honor and remember Leo with memorial donations to The Grafton Food Bank, PO Box 324, Grafton, MA 01519 or the Alzheimer’s Foundation of America (www.alzfdn.org/ContributetoAFA/makeadonation.html).

The calling hours for Dr. Jacques will be Saturday, April 11, from 9-10:30 a.m., at Roney Funeral Home, 152 Worcester St., North Grafton, followed by a funeral Mass at 11 a.m. at St. Mary’s Catholic Church, 17 Waterville St., North Grafton. He will then be laid to rest in Pine Grove Cemetery.

A guest book may be signed, messages of condolence offered, and directions may be obtained at www.roneyfuneralhome.com.