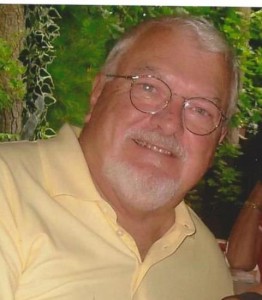 Hudson – Paul R. Doherty, 77, of Hudson, died Saturday, April 4, 2015, surrounded by his loving family, after a courageous 28-month battle with cancer. He is survived by his beloved wife of 52 years, JoAnn (Buscemi) Doherty of Hudson.

Paul was born and raised in Hudson, son of the late Ralph J. and Lorania (Brown) Doherty. He resided in Hudson his entire life, where he attended St. Michael’s schools and was a 1955 graduate of Hudson High School. Paul served in the U.S. Army until being honorably discharged in 1959. He was a graduate of Burdette Business School in Boston.

Paul spent 28 years as an accountant with WCVB (Ch. 5) Television Station in Needham until he retired. He was an active member of Saint Michael’s Parish in Hudson.

Paul enjoyed his morning walks, and was passionate about music, and he enjoyed going to the theater and dancing with his wife. He truly loved spending his spare time on his favorite beaches, Good Harbor Beach in Gloucester and Drake Island Beach in Wells, Maine. He spent many memorable summer vacations with his family in Gloucester, and was elated when he had the opportunity to purchase a summer home in Wells along with his wife, daughter, and family upon retirement. He would walk for miles on the beach and spend time outdoors whenever he could.

Most of all, Paul cherished every moment he had to spend with his family and friends and especially with his six loving grandchildren later in his life. He was truly a kind man, who enjoyed people, cherished his very close knit group of friends and he will be truly missed.

He is survived by his daughter, Deanna Fernacz and her husband Michael of Shrewsbury; his daughter- in-law, Julie (Kennedy) Doherty of Southborough, wife of Paul’s late son Marc David Doherty, who died in 2009; and his two sisters, Janet Ward of Marlborough and Cheryl Andrews of Florida. He is also survived by his six grandchildren, Taryn Fernacz and Danielle Fernacz, both of Shrewsbury, Marc Dennis Doherty, Danielle Doherty, Caroline Doherty and Michael Doherty, all of Southborough, along with his many nieces and nephews. He was the brother of the late Judith Frazer and David Doherty.