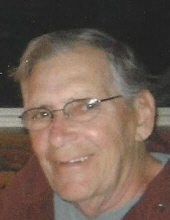 Worcester – Edward G. Heirtzler Sr. passed away peacefully, surrounded by loved ones, Wednesday, April 15, 2015 at Harrington Hospital in Southbridge. He was 85 years old.

Born in Baltimore, Md., and raised in Worcester, he was the son of Edward and Malvina (Rocheford) Heirtzler. Ed proudly served in the Marine Corps during the Korean war.

He resided in Westport, Conn. for 45 years, moved back to Northborough in 2004, ultimately returning to his hometown of Worcester three years ago.

“Mr. H” was a certified gemologist and owned and operated Playhouse Jewelers in Westport for many years until his retirement in 2000. He was a coin collector, an animal lover, and a longtime member of the Westport Kiwanis Club. He will be remembered most famously perhaps as a devout New York Yankees fan despite living in hostile territory Red Sox Nation.

Donations to the MSPCA may be made in his memory in lieu of flowers.

To share a memory or offer the family a condolence, please visit www.haysfuneralhome.com.