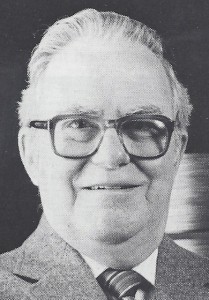 Shrewsbury – Normand “Babe” Wilhelmy, of Shrewsbury, was reunited in Christ with his beloved wife, Irene and his sons Normand Jr. and Stephen, Saturday, April 25, 2015, surrounded by his loving family, in his home in Shrewsbury.

He leaves behind a daughter, Cheryl McKane and her husband Andrew of Rutland Vt.; two sons, Bruce Wilhelmy of Worcester and Richard Wilhelmy and his wife Susan of Boylston; one sister, Thelma Hanley of Chicago, Ill.; 12 grandchildren; four great-grandchildren; and several nieces, nephews and friends. He was predeceased by his beloved wife, Irene (Argalli) Wilhelmy; his two sons, Normand Jr. and Stephen Wilhelmy; and three brothers, Eudore Jr., Roland, and Robert Wilhelmy.

Normand was born and raised in Marlborough, son of the late Eudore and Georgianna (Boudreau) Wilhelmy. He graduated from Marlborough High School, later going on to Lehigh University and graduating with a Bachelor of Science degree in Business Administration. After graduation, he enlisted in the Unites States Army and served his county proudly during WWII. After leaving the Army, he continued his education at Clark University and Worcester Polytechnic Institute in Worcester.

Normand went on to a career in manufacturing, working for St. Pierre Chain Corp. in Worcester and Hobbs Manufacturing Company, also in Worcester. He was at Hobbs for 21 years, holding many positions before becoming president and treasurer of Hobbs Williams Corp. of Toronto. He became chairman at Wolf Coach in Auburn and ended his career as owner and operator of Hobbs Fasteners in Worcester.

Normand also enjoyed his sports; he loved watching his beloved Celtics and Patriots and was a die-hard New York Yankees fan. He was a faithful member of Saint Mary’s Parish in Shrewsbury and enjoyed playing bridge with friends and traveling.

Relatives and friends are invited to attend Normand’s funeral Mass which will be celebrated Friday, May 1, at 10 a.m., in Saint Mary’s Church, 640 Main St., Shrewsbury. Burial with military honors will follow in Mountain View Cemetery of Shrewsbury.

In lieu of flowers memorial donations can be made in his name to Saint Mary’s Parish.