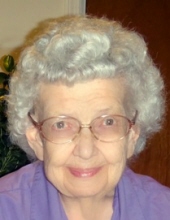 Northborough – Ellen M. (Larson) Oberg passed away peacefully Sunday, May 17, 2015 at St. Vincent Hospital in Worcester. She was 94.

She leaves behind her son, Bruce Oberg and his wife Sarah of Northborough; her daughter, June Roman and her husband Michael of Northborough; her grandchildren, Isak Oberg, Holly Alessi, Amber Oberg, Nea Oberg, Erik Roman and John Roman; and a nephew, grandnieces and grandnephews. She was predeceased by her siblings, Arvid Larson, Albert Larson, and Esther Scott.

Born and raised in the Larson homestead near Webster Square in Worcester, she was the daughter of Swedish immigrants Carl and Alma (Carlson) Larson. Upon her marriage to Warren Oberg in 1955, she moved to the Oberg Farm in Northborough where they raised their family. She worked as a payroll specialist at Westborough State Hospital for 20 years, retiring in 1990.

Ellen and Warren entered the real estate business in the 1960s when they founded Oberg Real Estate, and she later was a partner in Rainbow Real Estate during the 1980s and to early 2000s.

What really defined Ellen was her love for her family. A loving and kindhearted person, she always thought of others and put the needs of others first.

A calling hour will be held Thursday, May 21, from 1-2 p.m., followed by her funeral at 2 p.m. in Hays Funeral Home, 56 Main St., Northborough. Ellen will be laid to rest in the Larson family lot in Old Swedish Cemetery, Worcester.

Memorial donations may be made to the American Cancer Society.

For the online guestbook, visit www.haysfuneralhome.com.