Grafton – It has been a stressful few days for employees of Grafton & Upton Railroad as well as several local towns as the railroad has attempted to transfer two 120-foot-long propane cars from Taunton to a propane storage and transloading facility on Westboro Road in North Grafton.

First, the cars, which were transporting 120-foot long propane tanks, were unable to navigate a tight, congested corner in Milford.

According to Doug Pizzi, a representative for Jon Delli Priscoli, the owner of the railroad, there was a “miscommunication between the shipping company and the state Department of Transportation, which together planned and approved the route.”

After that situation was remedied, the next step was transporting the tanks to the North Grafton facility. But as they were approaching Grafton Common Tuesday evening , the two cars ending up derailing.

“Because the 120-foot long tanks represent over-gauge cargo for the railroad, in that they are longer than normal freight cars, which are 86 feet long, the cargo caused the wheelset to lose connection with the track,” Pizzi said.

Once back on the tracks, the tanks then ran into another snafu as they neared the nearby Washington Mills complex.

“One of the tanks would have come into contact with a small shed that slightly encroaches on the railroad right of way,” Pizzi said.

The railroad brought in a crane to the site Wednesday morning, Pizzi said, to adjust the tank on the flat bed so it would be able to clear the building. The two cars were then finally successfully

transported to the Westboro Road facility without further mishap.

The railroad still has two more cars in Taunton awaiting delivery to North Grafton. Those will be transported individually, Pizzi said, to avoid the problems the railroad encountered this week. 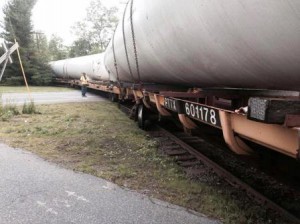