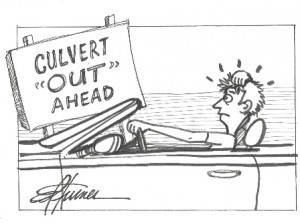 Northborough – For nearly a year, a heavily traveled section of Otis Street, that connects Route 9 in Westborough to Route 20 in Northborough, has been closed after it was deemed unsafe.

Although the cause was actually an unsafe culvert as opposed to an actual bridge, the closure still caused significant inconvenience for many commuters and retailers.

Seeking a rapid fix, residents had asked the town to build a temporary bridge until the old culvert could be replaced, but officials determined that, due to a number of factors, it would not be feasible or cost-effective.

At the April Town Meeting, voters approved $325,000 to build a new culvert. After receiving nine bids, town officials recently awarded the contract to a Quincy-based company, Kenefick Corp. The project, which is slated to start sometime this summer, will also include paving and grading the road and installing new guardrails.