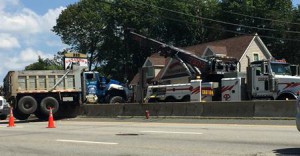 The Westborough Police received a report at 1:09 PM of a dump truck which had been heading west on Rte. 9 which was now crashed onto the jersey barrier at the intersection of Rte. 9 and Rte. 135. The arriving units found a 1998 Mack dump truck sitting on top of the Jersey barrier. Both fuel tanks were damaged and their contents emptied onto the east bound lanes of Rte. 9. East bound traffic was diverted onto Rte. 135 for about 2 hours while the Westborough DPW and Ma. DOT cleaned the roadway.

The Westborough Fire Dept. had spread a spillage containment system along with speedy dry over the area. Ted’s of Fayville was able to lift the truck back onto the roadway and tow it away.

The operator of the vehicle was identified as Brian Menard, age 37 of 28 Perry Ave. Worcester. The truck was owned by Richard Record and Sons of 709 South St. Shrewsbury.

The operator of the truck told investigators that a trailer truck pulled out of Rte. 135 in front of him forcing him to steer sharply to the left. That’s when the truck struck the barrier.

While directing traffic off of Rte. 9, Westborough Officer Brian Massey was struck by a trailer which was responding to assist MA. DOT in the cleanup. He was treated by Paramedics from the Westborough Fire Dept. and transported to U. Mass. Medical. He was treated and released. He will be out of work for a period of time.

Traffic on Rte. 9 East was back up for at least three miles well into Shrewsbury. The west bound lane of Rte. 9 was also affected.