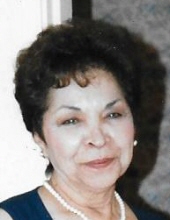 Born, raised, and educated in Mission, Texas, she was the daughter of Florentino and Rosaura (Trevino) Alvarado. She leaves behind her devoted husband of 53 years, Bernard J. Gillon Jr.; her loving children, Sandra Cawley and her husband James of Shrewsbury and James Gillon and his wife Karen of Sterling; four beloved grandchildren, Thomas Cawley, Kathryn Cawley, Benjamin Gillon, and Emma Gillon; her brother, Adolpho Alvarado of Texas; and numerous nieces, nephews and cousins. She was predeceased by siblings Santos Alvarado, Florentino Alvarado Jr., Guadalupe Alvarez, Hernestina Alvarez, and Delia Martinez.

Ellie lived in Billerica for 33 years before moving to Northborough in 2007. She owned and operated Center Flower Shop in Chelmsford in the 1980s, and later worked as a florist at Wayside Florist in Concord until she retired in 1997.

She enjoyed growing roses and had a love for gardening.

Ellie was proud of her Mexican heritage and cherished the time she spent with her family, especially spoiling her grandchildren.

A calling hour will be held Thursday, July 23, from 9:30-10:30 a.m., in Hays Funeral Home, 56 Main St., Northborough, followed by a Mass of the Resurrection celebrated at 11 a.m. in St. Rose of Lima Church, 244 West Main St., Northborough. Burial will be private at a later date in Howard Street Cemetery.

In lieu of flowers, donations in Ellie’s memory may be made to Catholic Charities of Worcester, 10 Hammond St., Worcester, MA 01610.

To share a memory or to leave the family a condolence, visit www.haysfuneralhome.com.