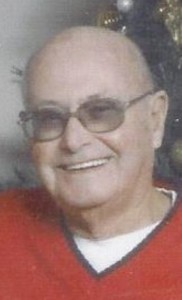 Hudson – James E. Parker Jr., 90, former longtime resident of Hudson, died Tuesday, July 21, 2015 after a period of declining health. He was the husband of the late Bernice E. Parker, who passed away in 2008.

Born and raised in Hudson, he was the eldest son of the late James and Vida (Brown) Parker. He served in the United States Army during World War II from 1943 to 1945, and was deployed to both the D-Day invasion and the New Guinea fronts.

James was a self-employed plumber in Hudson and served as the plumbing inspector for the Ttwn of Hudson for many years. He was a member of the First United Methodist Church of Hudson and the Hudson Order of Elks. He enjoyed snowmobiling, bowling, fishing, spending time at his camp in New Hampshire, and life itself.

He leaves his two sons, Richard W. Parker and his wife Dorothy of Hudson and Gary S. Parker of Grafton; four grandchildren, Kristine (Parker) Sherman of Hudson, Renee (Parker) Smigliani of Grafton, Julie Parker of Falmouth, and Ryan Parker of Watertown; nine great-grandchildren, Katelin, Andrew and Benjamin Sherman, Marcus and Ava Smigliani, Bryant and Brandon Bowman, Justen Parker, and Katie Oliveri-McMillan; and his brother, Edwin “Buddy” Parker of Freemont, Calif. and Kuai, Hawaii. He was the brother of the late Lillian Humes of Rhode Island.

Calling hours will be held Saturday, July 25, from 2-4 p.m., at Britton Shrewsbury Funeral Home, 648 Main St., Shrewsbury. Burial will be held privately at a later date.

In lieu of flowers, expressions of sympathy may be made to Christopher Heights of Worcester Resident Activity Fund, 20 Mary Scano Dr., Worcester, MA 01605, where he recently resided.