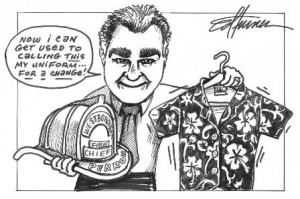 Westborough – After a 43-year career with the Westborough Fire Department, Fire Chief Walter “Nick” Perron will be hanging up his gear for good July 31. Perron spent the last 20 years as the department’s chief.

In the interim, Police Chief Alan Gordon will be acting fire chief. Although uncommon, it is not without precedent; several other local communities have had their police chief take on the dual role while searching for a new permanent fire chief.

According to the Board of Selectmen, Gordon will handle administrative tasks while the firefighting duties will be overseen by the department’s four captains.