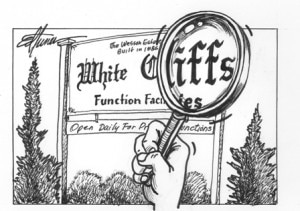 Northborough – After the LaCava family, which owns White Cliffs, decided to sell the iconic building last winter, residents and other fans of the historic property have been up in arms about will happen to it next.

After the family was unsuccessful in its attempts to sell the mansion, they announced that the property would be torn down. But after negotiating with the town, the LaCavas agreed to postpone that decision until December. In the meantime, the town’s Community Preservation Committee has approved hiring a Boston-based company to evaluate future possibilities for the property, which includes the main building and just over six acres of prime land on Route 20.

Michelle Gillespie looks back on Northborough Planning Board career