Shrewsbury/Worcester – Hundreds of people gathered at Regatta Point Park in Worcester on a crisp, cool Sunday evening Nov. 1 to celebrate the dedication of the new Kenneth F. Burns Bridge which spans Lake Quinsigamond connecting Shrewsbury and Worcester. After a program featuring local and state dignitaries, the contractor for the project, Middlesex Corp., treated the crowd to a spectacular fireworks display.

Construction on the new $89 million bridge started in 2011 after it was determined that the former structure, built in 1916 was in such a state of decay that it could not be repaired. The new bridge was built as part of the commonwealth’s Accelerated Bridge Program under the Patrick-Murray administration. Eighty percent of the funds came from the federal government, with the remainder from the state.

Lois Dwira, a young woman from Worcester, started off the dedication program with a beautiful rendition of the national anthem. Dwira, a 2015 graduate of Worcester Technical High School, is used to high profile performances; she has sung at events in front of luminaries such as President Barack Obama and former president Bill Clinton.

As each speaker on the program addressed the audience, they lauded the teams from the Mass. Department of Transportation (MassDOT) Division 3, whose office is located near the bridge, Middlesex Corp. and the various state and municipal officials who had worked on the project. Not only was the bridge aesthetically pleasing and built to last for generations, they agreed, it was also impressively done $5 million under budget and in spite of last year’s horrific winter, done four months ahead of the anticipated finish.

As she addressed the crowd, Lt. Gov. Karyn Polito, a resident of Shrewsbury, said the bridge served as a connection, both to the region’s past as well as its future.

“It’s the perfect bridge for our times and for our communities,” she added. “It also represents economic progress in Central Mass.”

Polito said it was fitting that the bridge continued to be named in honor of Kenneth F. Burns, a former Shrewsbury police chief and champion sculler who had founded Shrewsbury High School’s crew program. It was also fitting, she said, that the bridge encompassed a portion of Route 9 that is named in honor of the late Shrewsbury Police Officer James Lonchiadis, who was only 28 when he was shot and killed in 1975 when he interrupted an auto theft in progress.

Maurice DePalo, the vice chair of the Shrewsbury Board of Selectmen, noted that when town officials first learned the former bridge would have to be replaced, they “braced” for what they anticipated three to four years of traffic woes.

“But there were never any problems,” he added. “It all went very smoothly. Middlesex did a great job.”

State Rep. Hannah Kane, R-Shrewsbury, lauded the spirit of cooperation between local, state, and federal officials who worked on the project.

“This is how government, can, should and does work on a daily basis,” she added.

After the speakers’ portion of the program, the dignitaries gathered to pull the switch for the ceremonial lighting. The crowd cheered as the bridge, lit by LED blue lights, glowed over the lake. A dazzling display of fireworks then followed, a fitting and festive tribute, to a remarkable celebration. 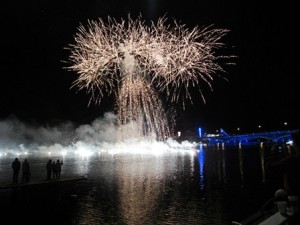