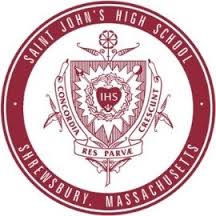 Shrewsbury – Playoff competition can be the best of times but also the worst of times depending on outcomes and perhaps no more proof positive was on display when the St. John’s High varsity soccer team hosted Westborough High in Division 1 quarterfinal action Nov. 7.

The second-seeded Pioneers (17-2-2) outlasted the seventh-seeded Rangers (11-4-5) in a matchup that saw each squad battling for their playoff lives. When the dust settled, both teams were physically and mentally spent from eighty minutes of grueling competition with St. John’s escaping with a 2-1 victory.

The win afforded Pioneers to move onto semifinal action with South High.

“We ran into a buzz saw today. They really raised their level of game and we just could not match it,” explained Westborough head coach John Hillier. “We got down late in the game, scored a goal but we couldn’t tie it up. It certainly wasn’t a lack of effort. Our kids left everything out there. I’m very proud of them and I wish Ken Salsman and St. John’s all the luck in the next round.

“These games take a lot out of you. We’ve been playing since August 29. A lot of seniors are disappointed and sad because all of a sudden this is their last game. That’s a tough pill to swallow.”

Each team flirted with goals in the opening half but could not cash in. The ice was finally broken one minute into the second half when junior co-captain Kyle Archambault found the back of the net depositing his kick underneath the outstretched reach of the Westborough keeper.

“The ball bounced back out on the corner kick and I hesitated left and brought my right foot and curled into the back post and it went in. I was really hyped,” said Archambault of his ice-breaker.

“To get a big win like this in front of our fans shows that we mean business this year, that we’re a special team.”

St. John’s would capitalize once more at the 25:35 mark when Adam French emerged from traffic untouched and in control of the ball. The senior co-captain drilled it lower right corner for what would prove to be the game-winner.

“I know that they (Westborough) wanted this so badly and they weren’t going to back down and we needed to step our game up,” said French. “We needed to get the ball out wide and I knew I could take it one-on-one through the middle then just putting it on net was what I wanted to do and we got it done.

“The chemistry on our team is one of our biggest parts of who we are. We have a lot of juniors on this team (twelve). The seniors really lead this team but we’re all friends. We all play as one team. We know our roles on this team and what we have to do and that makes a difference.”

Westborough would not surrender their post-season hopes without a struggle and for the final twenty-five minutes, the Rangers threw everything they had at their opponent. With 5:16 remaining, sophomore midfielder Tyler Stott struck putting his team on the board with a tally raising hopes for the comeback. But it was not to be as the Pioneers stiffened their defense down the stretch and carried off the win.

“The boys knew what they had to do in the second half,” said Pioneer head coach Ken Salsman. “They’ve been working so hard this year. We’re still re-building the program and working harder and harder every day. They come out and leave everything on the practice field and like today, they left everything out on the playing field.

“Westborough’s tough and a great program. A lot of our players know their players through club soccer and elsewhere and to make the separation shows the level of maturity that all these kids have and no matter what the outcome of their match is, they’re still friends through soccer. That’s what this game’s all about.”