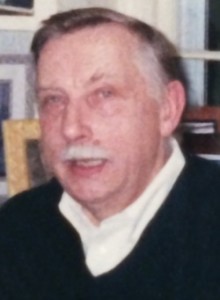 Jim is survived by a son, J. Matthew Koskinen and his wife Amy of Grosse Pointe Farms, Michigan and their children, Gabriel and Anne. He is also survived by a sister, Karen Sandini of Clearwater, Fla., and brothers- and sisters-in-law, nieces, nephews, and friends.

Jim was born in Worcester, the son of the late Carl W. and Miriam G. (Hikly) Koskinen. He grew up in Worcester and later proudly served his nation in the United States Air Force.

Jim graduated from Boston University and later moved to Syracuse, N.Y. where he earned an MBA from Syracuse University. He would later move to Westfield, before settling in Grafton in 1975 with his wife Anne.

He retired in 1999 as Purchasing Manager for A.D.E. Magnetics Company. He had previously operated his own machine shop, Hollander & Johnson Company in Worcester.

Jim had a lifelong affinity for cars and motorcycles, and upon his retirement he was able to become more involved in race car driving with his Lotus Formula Ford and Lotus 23B cars. Racing became a family affair, and Jim was proud to cheer for and be a part of his son’s racing here in the U.S. as well as in the U.K. Together, they shared their love of cars and speed. Some of his happiest memories were at the track with friends he made during those times. He was a member of the Sports Car Club of America.

He was known by family and friends as a skilled “tinkerer” and would spend countless hours working on cars, motorcycles, and equipment for the gardens at his home. He and his wife Anne enjoyed their many trips to Europe and Hawaii. He was a member of the Congregational Church in Grafton, and he enjoyed reading, gardening, and, of course, cars. He was a connoisseur of fine dining, wine, and good conversation, especially with family and friends.

Although Jim at times displayed curmudgeonly behavior, those who knew him well saw his true nature as a loving brother, husband, father, and grandfather and loyal friend.

Calling hours for Jim will be held Friday, Nov. 20, from 5-8 p.m., in Mercadante Funeral Home & Chapel, 370 Plantation St., Worcester. His funeral service will be Saturday, Nov. 21, at 10 a.m., in the funeral home. Interment will follow in Riverside Cemetery of Grafton.

Memorials may be made for Anne’s Garden at the Willard House Clock Museum, 11 Willard Rd., Grafton, MA 01536.