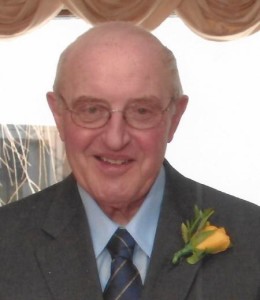 North Grafton – Attorney Richard M. Welsh, 83, of North Grafton, died peacefully Monday, Dec. 14, 2015 at the UMass Medical Center surrounded by his family. He was the beloved husband of the late Jean A. Welsh, who died August 29, 2015.

Born in Lynn, Richard was the son of the late Percy and Florence Welsh. He attended St. Mary’s High School, Boston College, Boston College Law School, and Boston University with a Masters in Laws in Taxation. Richard lived in North Grafton for over 50 years and dedicated his life to his family and the practice of law.

He leaves his children, Cheryl Welsh of Peabody, Theresa Rickard and her husband Alex of Southborough, Attorney Kathleen Mahoney and her husband David of Sutton, Attorney Richard Welsh Jr. and his wife Denise of Shrewsbury, Mark Welsh and his wife Pamela of Oxford, Attorney Michael Welsh and his wife Joy of Sutton, Maureen Woloszczuk and her husband Greg of North Carolina, Attorney Brian Welsh and his wife Lisa of Westborough, and the late Sean Patrick Welsh. He was the loving grandfather to 21 grandchildren, Christopher and Matthew Sanderson, Ryan, Brendan, Aaron and Nathan Mahoney, Meaghan (Lazak), Sean and Cara Welsh, Nicholas and Julianne Welsh, Zachary and Caitlin Welsh, Jocelyn, Elizabeth (Dew), Andrew, Alison, Ronald and Martin Woloszczuk, and Casey and Hailey Welsh. He was the brother of David Welsh and the late Priscilla Reece. He is further survived by several nieces, nephews and four great-grandchildren.

In lieu of flowers, the family requests donations be made in Richard’s name to the Alzheimer’s Association, 480 Pleasant St., Watertown, MA 02472.

To a memory of Richard or leave a message of sympathy with his family, visit his online guestbook at www.roneyfuneralhome.com/obituary/Richard-M.-Welsh/Grafton-MA/1571382#sthash.rpaEDdbR.dpuf.