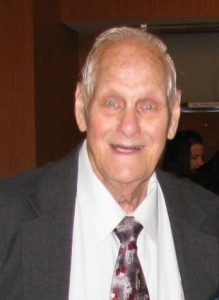 Jim was born April 9, 1931 in Newton. He graduated from Newton High School, where he was on the basketball team. At this time, he picked up the nickname “Ike.” He served in the army at Ft. Sill, Okla. during the Korean Conflict. He married Jeanne C. Yafrate of Waltham Sept. 20, 1953 and moved to Marlborough in 1961. They were married 62 years.

Jim was an asbestos worker in the Pipe Coverers Union Local 6. Later, he worked at Nuclear Metals in Concord and had his own business.

Jim was well known around Marlborough for his jovial personality and was an avid New England Patriots fan. His greatest joy was to be surrounded by his family.

He is survived by his wife, Jeanne; daughter, Brenda Jenkins of Sutton; and sons, James of Harpers Ferry, W.V., David of North Chelmsford, and Mark, Doug and Chris, all of Marlborough. He had 10 grandchildren and four great-grandchildren. He will be missed.

Visiting hours will be Wednesday, Dec. 30, from 4-8 p.m., at Rowe Funeral Home, 57 Main St., Marlborough. Funeral services will be held Thursday, Dec. 31, at 9 a.m., at the Immaculate Conception Church in Marlborough.