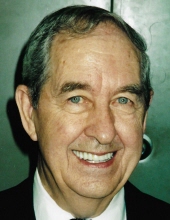 He leaves his two sons, John McIntosh Jr. of Leominster and Dennis McIntosh of San Diego, Calif.; seven grandsons; his great-grandchildren; and extended family. Also surviving is his daughter-in-law, Kathryn McIntosh of Kernersville, N.C., and his brother, Melvin McIntosh of Clearwater, Fla. he was predeceased by a son, retired Captain Kirk McIntosh, USMC, and siblings, Richard McIntosh, Howard McIntosh and Dorothy McIntosh.

Born in Northbridge and raised in Worcester, he was the son of Melvin and Olive (Girard) McIntosh. A U.S. Navy veteran of WWII, he served aboard the USS Ticonderoga in the Asiatic-Pacific Theatre. He lived in North Grafton for 50 years before recently moving to Shrewsbury.

A salesman by trade in the field of metrology, John spent much of his long career with Rank Precision Industries.

He was a 32nd degree Mason with the Franklin Lodge in Grafton. He was also a member of Aleppo Temple. He was proud of his Scottish heritage. He traveled the world with his wife, visiting Scotland, Japan, Israel, and much of the United States and Canada, amongst other places. He was baptized in the Jordan River. He loved to play the organ and enjoyed puzzles of all kinds. His other hobbies included collecting lighthouse memorabilia and repairing watches. In later years, he participated in USS Ticonderoga reunions with his shipmates.

John will be remembered as a generous, kind, and giving man who had a smile that delighted all in his presence.

The family would especially like to thank the staff at Shrewsbury Crossings of Shrewsbury for their wonderful and compassionate assistance caring for John.

Calling hours will be held Thursday, Jan. 7, from 6-8 p.m., in Hays Funeral Home, 56 Main St., Northborough. John’s funeral will be held Friday, Jan. 8, at 10 a.m., in the funeral home. Burial with military honors will follow in Old Howard Cemetery of Sutton.

To share a memory or leave the family a condolence, visit www.haysfuneralhome.com.