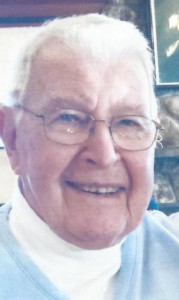 Grafton – Toivo J. Mickola of Grafton, formerly of Worcester and North Eastham, died peacefully at home Thursday, Dec. 31, 2015. He was predeceased by his wife, Kathryn, in 2004, after 58 years of marriage.

Toivo was born Jan. 10, 1921 in Fall River, the son of Jalmar and Lydia Mickola. He lived most of his life in Worcester, attending Worcester Public Schools. In 1942, he enlisted in the United States Marine Corps, serving in the South Pacific and Guadalcanal until his Honorable Discharge in 1945.

In 1946 he married his beloved wife Katie McGinnis, following three years of courtship during World War II while both were serving in the military – Katie as an Army nurse deployed to the Philippine Islands and Japan.

He worked for many years at Pullman Standard Company then Jamesbury Corporation until his retirement in 1986. At that time, he and Katie began year-round residence at their home on Cape Cod. In retirement, Toivo enjoyed golf, wood-working, volunteering with Habitat for Humanity and the Eastham Council on Aging, and taking long road trips with Katie.

A devoted husband, father, grandfather and great-grandfather, Toivo will be greatly missed by his family, including daughter Susan and her husband Timothy Fitzpatrick of Grafton, with whom he lived; daughter Patricia and her husband Gregory Van Brunt of Boynton Beach, Fla.; grandson Shaun Fitzpatrick and his wife Jacqueline of Framingham; grandson Petty Officer Christopher Fitzpatrick, USN, currently stationed at Pearl Harbor Naval Base, Hawaii; and five great-grandsons, Colin and Rory Fitzpatrick of Framingham, and Logan, Lyle, and Wyatt Fitzpatrick of Millbury. He is also survived by his cousin, Henry Bulette of Littleton, and many nieces and nephews, friends and neighbors.

The family would like to thank Dr. Sara McGee and the Notre Dame Hospice team for their care and support during Toivo’s illness.

There are no calling hours. Following cremation, burial will be in Worcester County Memorial Park at the convenience of the family. To view his online guestbook, visit www.roneyfuneralhome.com/obituary/Toivo-J.-Mickola/Grafton-MA/1575744#sthash.mI6rqWH0.dpuf.