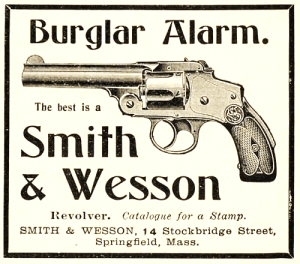 Part 3 of a series of articles on the history of the Daniel B. Wesson “White Cliffs” mansion in Northborough, Mass.

Where did the money come from?

Northborough – Have you ever wondered how Daniel Wesson could afford to build and support an elaborate summer mansion in Northborough?

Mr. Wesson’s mansion was built in the late 1880s well after the 1856 start of his firearms business with Horace Smith. Uses for firearms include: law enforcement, self-defense, hunting, target shooting and the military. Of these uses, military applications were the most lucrative.  Shortly after Smith & Wesson built their new manufacturing facility in Springfield, Mass. the American Civil War started.

During the war they were manufacturing some 2,500 revolvers a month. At the end of the war, Horace Smith and Daniel Wesson had incomes of $160,000 per year and were the wealthiest men in Springfield. By 1870 they had developed their Model-3 military revolver which became an international success. Throughout the 1870s the Russian government alone purchased over 130,000 revolvers. Smith & Wesson was becoming the largest supplier of military revolvers in the world.

As you can imagine, sales for military use played an important role for financing the construction and maintenance of Wesson’s Northborough mansion prior to its sale in 1910.

Michelle Gillespie looks back on Northborough Planning Board career