Northborough – On Feb. 15, the day after Valentine’s Day, Morgan Foley sat in her regular place at the front desk at Northboro Chiropractic, where she has served as the office manager and receptionist for almost two years. But something was different. On the fourth finger of her left hand was the sparkling reason why.

Over the Valentine’s weekend, Mike Brown had proposed in a most original way. He had arranged dinner at 7Nana Japanese Steakhouse on Shrewsbury Street in Worcester. 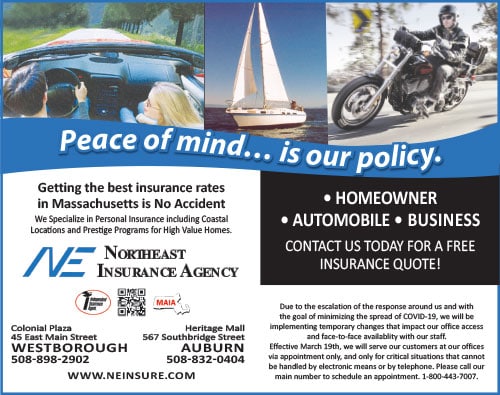 Explained Foley, “This is the fourth year that we have gone out for a hibachi dinner on Valentine’s Day. My sister Gray dropped us off on the pretense that we shouldn’t be driving if we were having a few drinks. We split a Scorpion (an alcoholic concoction with fruit juice, several types of liquor, served in a very large bowl with a ceramic volcano in the center) and had our dinners.”

Then a very nervous Brown put an engagement ring in one pocket and a specially ordered fortune cookie in the other. He slipped her the cookie, and as she opened it and read the message, got down on one knee, and presented her with a beautiful diamond ring. The fortune cookie read, “Will you marry me?” Foley said she yelled, “Yes!”

More surprises followed. After paying the bill, the couple went out to Shrewsbury Street where a shiny black stretch limousine awaited them. The newly engaged twosome were driven around Worcester for an hour drinking champagne and enjoying the winter view of Worcester. The next stop was the Holiday Inn on Summer Street, where they checked into a room filled with flowers and another bucket of champagne. Family had completed the arrangements, including delivering overnight bags.

“I felt like James Bond when I was planning all this stuff!” exclaimed Brown.

Foley’s sister then picked them up and drove them to the Mexican restaurant Mezcal to announce their engagement and celebrate with Foley’s father and his girlfriend.

“I just didn’t want this night to end,” said Foley.

Valentine’s weekend 2016 is the culmination of a romance that has sputtered on and off since 2008, when the couple met through relatives at a house in Eastham on Cape Cod. Both were still in high school, but hit it off and hung around with each other all that weekend. He attended David Prouty High School in Spencer and she was at Wachusett Regional High School in Holden. They communicated via the computer and phone calls. Their first date was bowling. Then they broke up for three years.

After high school, Brown enlisted in the Marines and came back to the area for leave. He asked Foley out again, and she accepted a date for the movies.

“He looked great, really good, built and muscular. He went from 130 pounds to 170 pounds,” said Foley. Brown went back to North Carolina, then California for further training, before being stationed in Chicopee. He was in the reserves, so worked for the military on the weekends, and attended college at UMass Lowell during the week. Again, the two lost touch.

By this time Foley was in college at Anna Maria in Paxton. Brown was home for the summer. A mutual friend texted Foley to come over to the Brown’s for a small get-together. She remembered that they stayed up almost all night catching up. They remained good friends that fall, and spend much of the Christmas holidays together. This time the sparks started to fly. In January, while they were watching a movie, he asked her to be his girlfriend, and she quickly said, “No, because we aren’t good at long distance relationships.”

He then took her outside and showed her that he had written a message with bricks on the snow that said, “Will you be my girlfriend?” She reconsidered after he had frozen his fingers putting out all those bricks, and finally said “yes.” The couple have been together ever since.

The couple said they have not yet decided on a wedding date.