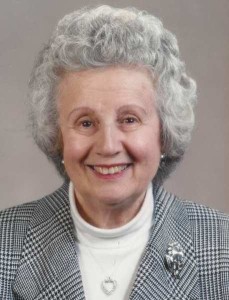 Marlborough – Esther V. Berte, 93, a lifelong resident of Marlborough, passed away peacefully Thursday, March 17, 2016. She was the wife of George L. Berte, who passed in 1977, and the daughter of the late John and Lena (Montagna) Merlini.

Esther graduated from Marlborough High, class of 1940, and worked 17 years as a hair stylist until her retirement in 1983.

Esther enjoyed her family and friends, gardening, and baking, and had a passion for writing, especially her memoirs, which she started in 1993. She was a lifelong member of St. Ann’s Church.

Esther is survived by two sons, George A. and Richard C. Berte, and daughter-in-law, Gail; two step-grandchildren, Tom and Ryan Pajala; and 2 step-great-grandchildren, Danny and Joey. She has one brother, Albert Merlini and his wife Barbara from Laconia, N.H.; two grandchildren, Evan and Janelle (Thresher) and her husband Jay; and four great-grandchildren, Anthony, Ava, Kailyn, and Braeden.

There will be no calling hours per Esther’s final request, as the services will be private.

In lieu of flowers  the family highly recommends contributions be made to the Alzheimer’s Association and mailed to Fitzgerald & Collins Funeral Home, 378 Lincoln St., Marlborough, MA 01752. All the proceeds will then be mailed together in Esther’s fond memory.

All are invited to sign Esther’s online guestbook at www.CollinsFuneral.com.