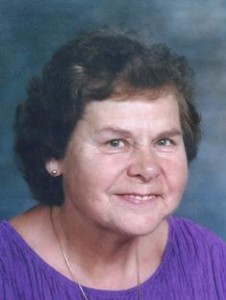 Northborough – Evelyn L. (Blanchard) Hart passed away Friday, April 1, 2016, surrounded by her loving family, at the Coleman House of Northborough after a period of declining health. She was one week away from turning 91.

Born in Worcester, she was a lifelong resident of Northborough. Evelyn graduated from Northborough High School, class of 1943. She was the daughter of the late Henry P. Blanchard of Worcester and Stella Auger of Uxbridge. Her husband, Raymond W. Hart, Sr. died in 1991.

She leaves her children, Jeanne Malecki and husband Les of Hudson; Raymond Hart Jr. of Northborough; David Hart and wife Mary of Owls Head, Maine; Dolores Sullivan and husband Joseph of Northborough; Dennis Hart and Thom Smyth of Upton; Donna Hart of Northborough; Jeffrey Hart of Hudson; Dorothy Ahlman and husband Art of Hampton, N.H.; Daniel Hart of Owls Head, Maine; and Douglas Hart of Northborough. She was predeceased by a son, Donald, who died in 1982, and a grandson, David Hart Jr., who died in 2015, and also siblings Dorothy Prescott and Byron Blanchard. She is survived by 13 grandchildren; great-grandchildren; her brother, Milton Blanchard of Arizona; and several nieces and nephews.

She loved trips to Nantasket Beach, Cape Cod and Ogunquit, Maine. She was an avid Red Sox fan and enjoyed playing bingo. Most of all, she enjoyed spending time with her family who meant the world to her.

Calling hours will be held Tuesday, April 5, from 4-7 p.m., in Hays Funeral Home, 56 Main St., Northborough. Her funeral will take place Wednesday, April 6, at 11 a.m., in the funeral home. Burial will follow in the Howard Street Cemetery.