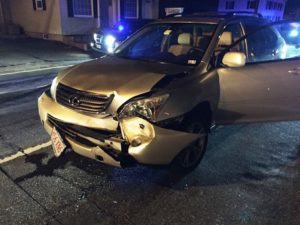 On 4.30.16 at approximately 1:56 a.m., Officer Patrick Smith was on patrol in a marked Ford Explorer when he was rear ended by a 2006 Lexus SUV while stopped at a red light on Route 9 West at the intersection of Central Street.

The driver of the Lexus was identified as Patrick DeCourcy (age 35) of Southborough. He was charged with O.U.I. and Negligent Operation of a Motor Vehicle by the Southborough Police Department.  Mass. State Police assisted with the investigation and crash scene. Officer Smith was transported to MetroWest Medical Center in Framingham by Southborough Rescue for complaints of pain. He was treated and released but is now out on injured status.

Mr. DeCourcy was booked and placed in lockup pending a bail hearing. The incident remains under investigation by the Detective Division.

Northborough Zoning Board weighs in on proposed transportation, distribution moratorium