Marlborough – Although rainy weather caused cancellation of the city’s 150th annual Memorial Day Parade, coordinator Wayne Grant shared a message about the two late Marlborough veterans – Robert Touchette and Robert “Bob” Page – for whom the parade was dedicated to this year.

Touchette sacrificed his life on January 27, 1962, by diving his disabled F-86 into the Alabama River to avoid a populated area. 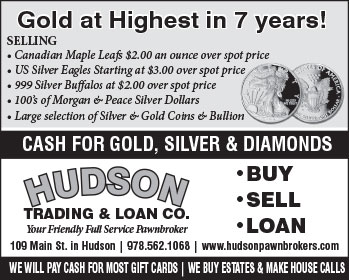 “This true hero is remembered by all, including his Marlborough High 1949 classmates,” said Grant.

Page, who passed last year, dedicated his time to all veterans and the residents of Marlborough, as a member of the City Council, the Lions Club and the Disabled American Veterans.

“He coordinated the Memorial and Veterans Day parades for many years and honored all of us while performing these duties,” said Grant.

Each year the parade stopped to decorate the monuments to veterans of the Vietnam War, Korean Conflict, World Wars I and II, the Spanish American War and the Civil War.  Each ceremony includes taps and a gun salute.

The interest and ingenuity of two local Girls Scouts from Troop #72855 – Jackie Foreman and Elaina Greenstein Himlee – has added a new dimension to the traditional veterans program.

“Because of the location of the women’s veterans’ memorial statue, we can’t decorate it during the program so the girls came up with a novel idea,” said Stanley. “With the help of their troop leaders they built an exact duplicate, are maintaining it and will present it at all parades, a concept that was embraced and accepted by all of the veterans that heard their impressive story.”

To the dedicated residents who appeared at the American Legion Post Headquarters on Maple Street on Memorial Day, and those standing along Main Street holding their umbrellas, Grant said he apologizes for the parade cancellation.

“I am hoping we will have a more fitting tribute to our veterans on Veterans Day in November,” he stated.