Shrewsbury – If you are a member of Planet Fitness in Shrewsbury, and work out almost any morning of the week, then you certainly know Marion Kaletski. You might not know her name, but she certainly makes an impression.

The 5-foot, 114-pound spitfire always has a smile on her face and a warm “hello” for everyone she meets. And she is in better shape than most of her fellow exercisers.

Born in Brooklyn during the Great Depression, Kaletski was always a tomboy.

“I grew up playing handball…as well as baseball and football… all on the streets of New York,” she recalled.

She had no problem keeping up with the boys, she said, which earned her a “Most Athletic” title in high school.

It was a time, she said, “when it was proper for girls to earn distinctions like ‘Best Dressed’ or ‘Best Looking.’ I qualified for neither of those.”

She lamented that, when she was in school, academic and sports college scholarships were not available for women.

“I’m so grateful that all of that has changed,” she said.

Kaletski was an honor student, later embarking on a successful career at Quinsigamond Community College before retiring at 71.

She moved to Massachusetts in the 1940s, when she got married. Settling in Shrewsbury, she took up tennis, skiing, and racquetball. She also tried golf but didn’t enjoy it.

“I seemed to always gravitate toward fast-moving sports,” she said.

Her first foray into aerobics and strength training was at a Gloria Stevens studio, participating in workouts similar to the ones Jane Fonda popularized in the 1980s.

“The majority of the classes were attended by 20- to 50-year-old men and women, all of whom were very capable and fit,” she noted. “I think working out with this group was a motivating factor, one that was upbeat and fun. I feel mentally surrounding oneself with younger people makes you forget about your aches and pains.”

Although she has both osteoporosis and atrial fibrillation, which was genetically inherited, she said, “I allow neither to stop me from working out four times a week. I look at it as my job.”

She is proud to say that she can still hold a 15-minute plank and do military-style pushups.

At Planet Fitness, where she has been exercising for the past two years, she devises her own workouts, and works out with a group of about eight women who feel lucky to have her to motivate them.

“She kills us with her workouts,” said group regular Gina. “She is an inspiration to us all.”

Twice a week, she also does a 30-minute circuit with Pam, the trainer at Planet Fitness. Kaletski credits Pam’s expertise for offering her, and others, a very hard and beneficial workout.

In addition, Kaletski hikes, bikes and does her own housework and yardwork. She also does not smoke or drink alcohol.

Now a widow, Kaletski’s “close-knit, wonderful family” includes two children, six grandchildren, and three great-grandchildren – with one on the way.

Kaletski said she completed her “bucket list” in 2014, which included bungee-jumping, zip-lining, wall- and rock-climbing, a 26-mile tundra bike ride, the polar plunge, sky-diving and getting a tattoo.

“My life has been wonderful,” she said. “I have nothing to complain about; and I do not stress about things over which I have no control. I enjoy life!”

Her future objective in life, she said, and the newest addition to her depleted bucket list, is doing 90 military-style pushups on her 90th birthday.

“Will it happen? Probably not,” she said. “But…that tattoo…I thought that would not come to pass either. Wish me luck!” 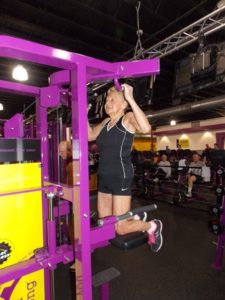