In 2012 Marlborough was left reeling when Fidelity Investments left the city, just as Hewlett Packard had done a few years prior. But now things are definitely on the upswing as the 210,000 square-foot new GE Healthcare joins Quest Diagnostics on the former HP complex, which is now known as Marlborough Hills.

Greeting the guests at the event, Kieran Murphy, president and CEO of GE Healthcare Life Sciences, said, “It is a massively proud day for us. And it only happened because a lot of people worked hard to make it happen.”

GE Healthcare Life Sciences, a division of General Electric, Co., was previously located in New Jersey. Although some employees will be transferred to the new Marlborough facility, the move allows the company to “reboot” by allowing it to tap into the local job force, Murphy said.

The facility will at full capacity employ more than 500 scientists and professionals by the time it is fully operational in late 2017, company officials said. It will have 40,000 square feet of laboratories supporting cell and immune therapy research and development, early stage drug development, biomanufacturing, as well as scientific and medical affairs support.

Travis McCready, the president and CEO of the Massachusetts Life Sciences Center, addressed the audience, noting that the new building was “a turnkey facility for life sciences.”

“It aligns with the mission to turn Massachusetts into a turnkey for drug discovery and biomanufacturing. It’s truly revolutionary to see what you are offering here,” he said.

Baker noted that the efforts to relocate the company to Marlborough was a great example of a “team” composed of local and state government and a private business working together. The decision to move GE Healthcare as well as the decision for parent company GE to locate its headquarters in Boston, proved that Massachusetts was a “global leader in life science innovation,” Baker said.

The idea of cell therapy and the process to help people use their own antibodies to fight cancer was a “really big idea,” he said.

“GE is a big, big, thinking company,” he added, as were the people, research institutions, educational institutions and businesses” in Massachusetts.

He also praised the efforts of Marlborough Mayor Arthur Vigeant, the City Council and other local officials for their “can do attitude” in attracting not only GE HealthCare but other major companies recently as well. Those companies besides Quest Diagnostics include TJX (which purchased two Fidelity buildings) and Boston Scientific.

GE Healthcare also has a facility in Westborough that will continue to produce single-use products and consumables for biopharmaceutical manufacturing.

GE expects to have nearly 5,000 employees working at its different Massachusetts locations by the end of 2016, officials said. 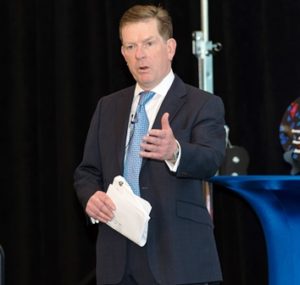