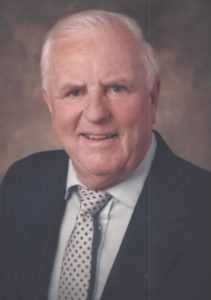 He is survived by his wife of 52 years, Thelma Powers; his daughter, Christine Lemoine, her husband Marc, and his son, Kevin Powers; grandchildren Amanda and John Lemoine; his brothers, Paul Powers and his wife Nancy and Phil Powers; and many nieces and nephews.

John was born in Worcester, son of the late Mary (Joyce) and John J. Powers. He grew up in Worcester and graduated from St. Stephen’s High School. He served proudly in the U.S. Army during the Korean conflict and worked at Mass Electric for 41 years before retiring in 1992.

John was president of Worcester Central Federal Credit Union, Vice President of Local 330 BUW of New England, and a member of Whitinsville Country Club and the First Friday Club.

All are welcome to gather with John’s family and friends Tuesday, July 5, from 5-7 p.m., at Roney Funeral Home, 152 Worcester St., North Grafton. A funeral Mass will be celebrated for John Wednesday, July 6, at 12 p.m., at St. James Church, 89 Main St., South Grafton. He will then be laid to rest at Fairview Cemetery in South Grafton.

All are welcome to honor John with a memorial donation to the charity of their choice.

To share a memory of John or leave a message of sympathy with his family, visit www.RoneyFuneralHome.com.