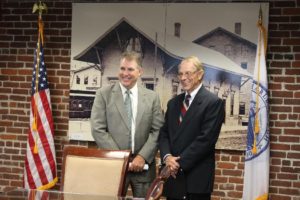 Marlborough – Mayor Arthur Vigeant announced June 28 the 2016 Marlborough Labor Day Parade Grand Marshal will be longtime resident and well-known community member Walter Bonin who has a lifetime of dedication to the City of Marlborough.

Each year, the Marlborough Labor Day Parade Committee commences their search to find a Grand Marshal to traditionally lead the parade. The committee looks for individuals who live in Marlborough that have contributed to the community beyond the definition of their job.

Bonin was born and raised in Marlborough. He and his wife Joanne raised their daughter Danyelle in the city, and continue to live in their Marlborough home. Danyelle shares her father’s political passion and served as a city councilor in 1988 and 1989; she now lives in neighboring Hudson with her husband John and two daughters Nicole, 14, and Jacqueline, 12.

Bonin worked for 26 years in various product line roles at Digital, many of which he spent in the office tower in Marlborough. He continues to work in Marlborough at Walter Bonin Financial Service & Insurance.

Some may think that Bonin’s interest in city politics and his involvement in the city first sparked when he ran and was elected for 11 years to Ward 2 City Council in 1968.

However, “it actually wasn’t this election that made me want to become involved, but rather it was something that happened 20 years earlier,” Bonin explained.

At age 5, Bonin heard Fire Captain Mike Boyle and Charlie Lyons talking during a card game about issues that were facing the city. Bonin was inspired by their pride in Marlborough and decided, “I’m going to be one of them someday.”

“Marlborough – Where Tradition and Economic Vitality Meet!” is the theme of this year’s parade, chosen in celebration of Marlborough’s strong traditions and its continued economic growth.

Bonin played a large part in enhancing the transportation in Marlborough which contributed to this growth. He has led Marlborough’s Transportation Task Force for many years and participated on the Community Development Authority’s MetroWest Growth Management Committee. Bonin notes one of the authority’s most important accomplishments was reaching an agreement with Framingham to extend local bus service from Framingham to Marlborough. As the city has grown, so has its transportation needs. Bonin’s experience on the Community Development Authority led him to serve as a board member on the Marlborough Economic Development Corporation since its inception 10 years ago.

In 1990, Bonin was appointed to the Licensing Board and he is now serving his 27th year. His strong finance skills made him a great candidate to serve on the city’s Finance Committee and on the Marlborough City Hospital Board. Bonin says that serving on the hospital board for five years “was a great experience and a way to understand how important a community hospital is.”

He then utilized his skills on the License Board, helping to adopt legislation that would make Marlborough attractive for hotels and restaurants to establish businesses in the area and help the city to continue to economically thrive.

When asked about being chosen as the 65th Marlborough Labor Day Parade Grand Marshal Bonin said, “I must say as honored as I feel, I am even more thankful. I could not have done a single thing without the support and leadership of so many that came before me.”

Bonin is quick to recognize the wonderful opportunities afforded to him as a resident of Marlborough and is proud to pay this great fortune forward. He continues to be a generous financial supporter of Greater Marlborough Programs and the Marlborough Boys and Girls Club. For years Bonin attended the Boys and Girls Club and understands the importance of resources like this to the youth in his community. Bonin reminisces about his time at the Boys and Girls Club and his 1960 heavyweight boxing championship win. This accomplishment not only left Bonin with a broken nose and a trophy, but it helped to instill in him the need to be persistent, maintain a great work ethic and make every effort to meet each goal.

“We are so proud to have a community member so invested in volunteering his time to ensure the betterment of our city, leading our 65th parade,” Vigeant said.

For additional information and parade updates, visit marlboroughlabordayparade.com and the Facebook.