Shrewsbury – In January 2006, the town launched the Shrewsbury Water Conservation Project to help promote water conservation. This program was launched in response to the Mass. Department of Environmental Protection’s water conservation requirements. Under the plan, drinking (tap) use should be kept to a minimum to ensure that there is enough flow for everyday use as well as fire protection in town. Water is to be saved by limiting use of in-ground lawn sprinklers, using rain water when possible, and using low-flow fixtures. This aims to avoid environmental degradation, preserve a precious natural resource, and save considerable capital and operating costs.

At the July 12 Board of Selectmen’s meeting, Shrewsbury Water & Sewer Superintendent Robert Tozeski gave a presentation to the board and asked for further restrictions as a drought watch had been declared for central Mass. the week before. He noted that the water deficit was now four to five inches in depth and that “the Worcester area is in serious condition.” 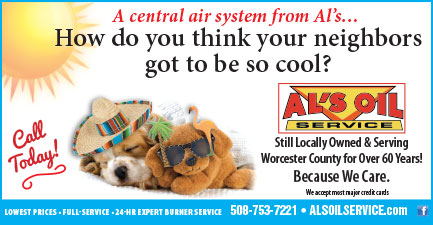 Tozeski recommended that automatic watering of lawns should be suspended, with water saved for drinking and firefighting instead. He also recommended that no more than two inches be added to swimming pools, with current usage up almost 9 percent over last year. Maximum daily usage is in the morning and early evening. He recommended that outdoor watering be suspended on Monday, Tuesday and Friday.

If the new plan were put into effect, Tozeski told the board, approximately 250,000 gallons per day might be saved and the town would be better prepared for any emergency. Shrewsbury currently supplies four million gallons of drinking water per day; demand has been running 3.6 to 3.9 million gallons per day.

Selectman Chair Maurice DePalo noted that dry, hot weather was on the way, that this plan had merit, and that local newspapers should be notified.

The additional water restrictions were approved unanimously. Under the plan, adding more than two inches to swimming pools is prohibited, as is use of lawn sprinklers. Hand-watering of outdoor vegetable gardens remains approved. These additional restrictions are in effect from July 12 until Sept. 30.