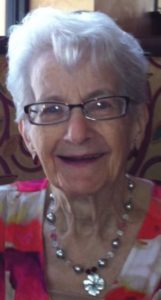 Born and raised in Framingham, she was the daughter of the late Harry J. and Loretta (MacKay) Brillhart. She moved to Grafton during the late 1990s to live with her daughter, Kathleen Holdsworth; her son-in-law, Paul M.; and three of her grandchildren, Douglas, Jason, and Sarah.

In addition to her daughter, Kathy, Ruth is survived by another daughter, Mary Gifford and her husband Jonathan, and a son, Kevin M. Foley and his wife Paula of Framingham. She also leaves grandchildren, Melissa Richardson of Virginia Beach, Va., Trevor and Kelsey Gifford of Bellingham, as well as a great-granddaughter, Arrianna Bogolea of Virginia Beach. She is also survived by her sister, Patricia A. Bratica of Framingham, and her brother, John “Jack” Brillhart of Milford, as well as many nieces, nephews, and extended family members. She was predeceased by her brothers, Harry “Bud” Brillhart and James Brillhart, and her sisters, Rita Stuart and H. Jean Foisy.

Ruth enjoyed time with her family, as well as planning and participating in the many family traditions, whether it was dressing up for Halloween, stuffing Easter eggs, or shopping for and wrapping Christmas presents.

The family suggests memorial donations to remember Ruth be made to their local chapter of the Alzheimer’s Association or to a charity of the donor’s choice.

A Mass of Christian burial celebrating Ruth’s life will be held Friday, Aug. 5, at 11 a.m., at St. Mary’s Catholic Church, 17 Waterville St. (Route 30), North Grafton. She will then be laid to rest next to her husband at St. Stephen’s Cemetery in Framingham. All are invited to calling hours Thursday, Aug. 4, from 4-7 p.m., at the Roney Funeral Home, 152 Worcester St. (Intersection of routes 140 & 122), North Grafton.

An online book for condolences and to share memories of Ruth is available at www.RoneyFuneralHome.com.