It’s called a “micro burst” when the sudden storm hit at 8:24 p.m. [July 22] and we lost electricity here. Even the emergency lights didn’t work so I was grateful for my flashlight even though it was flickering. I was safe in my bed just listening and talking with God and letting him know how grateful I was to have a roof over my head and I was dry and comfortable. I really noticed the silence and took advantage of it and the calmness of it all. By 2 a.m. I was curious enough to call the fire department to find out anything I could. National Grid was working and wouldn’t stop until power returned. However their instruction to call National Grid directly to report outage was fruitless even though I tried to reach them. Computer prompts were the only means of communicating and they weren’t working to accommodate human beings so I gave up and went back to bed.

Thank you God for my Stroke Buddy, Paul. He was the only one to call and check on me. I assured him all was okay only to learn when we hung up that my electricity was again not working. Thus the silence put me back into sleep mode until 6:30 a.m. when I used my microwave to cook breakfast and again around 10 a.m. to heat water for my cup of coffee. 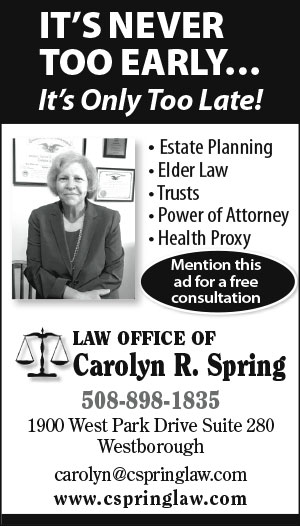 Outside at the round table courtyard I saw a few tenants sitting and joined them to learn what I could. As I made my way to them I flung the broken twig branches to the side so that no one would trip in the walkway. Their words confused me, such as “Pole” as I was looking at street light poles, flag poles and my pole that holds my bird feeder. That wasn’t the “Pole” they meant. Their meaning was different from my perception. I was looking for vertical poles but they meant the outside light, left of our apartment door jamb.

Ironically I called Paul back to relay my message and immediately my phone rang and it was Paul. No he hadn’t received my call—it was a coincidence he was calling me now.  I relayed that I was fine and thanked him as he was the only one who had called to check on me. And thank you God for putting Paul, my Stroke Buddy, in my life.  ( Paul, too, is a stroke survivor as am I.)
Joan Antonio
Westborough