Worcester – In just over one-week’s time, the Worcester Polytechnic Institute (WPI) women’s soccer team will host Salem State University in its 2016 home-opener, and while third-year head coach Steph Schafer will field a more-than competitive team as always, the absence of one former player in particular will necessitate some time for her to get used to.

2016 graduate and Shrewsbury native Emily Doherty was a team leader, a prolific scorer and a competitor that Schafer knows will not be easy to replace. She was the leading team and conference goal scorer (18 goals, 41 points a year ago and 37 goals, 87 points career) who brought talent and a tireless work ethic each and every time out. The combination of Emily’s speed and ability to finish made her nearly unstoppable, said Schafer.

“Emily was one of our captains for the 2015 season and she was a leader by example. Her teammates looked up to her not only for her efforts on the field but also in the classroom. Off the field, she is driven, humble and always willing to lend a helping hand.”

As significant as her accomplishments were on the soccer field, there is much more than athletics to this poised and instantly-likeable young woman. Doherty was one of seven women nominated by their institutions to represent the New England Women’s and Men’s Athletic Conference (NEWMAC) as its National Collegiate Athletic Association (NCAA) Woman of the Year nominee. The award honors student-athletes based on academics, athletics, service and leadership.

“The NCAA Woman of the Year Award honors graduating student-athletes who have distinguished themselves throughout their collegiate careers in the areas of academic achievement, athletics excellence, service and leadership,” reads a recently-issued press release by the association.

The 2016 NCAA Woman of the Year will be announced Sunday, Oct. 16, in Indianapolis, Ind.

Just how far Doherty has come since those early days as a WPI freshman is staggering. Hard work, commitment and a selfless character were the keys in bringing her achievements together as well as an institution that has been supportive and challenging in all aspects of her college experience.

“My worst grades were in my freshman year of college because I had too much time,” admitted Doherty. “I had to fill it with something so I did it with community service. I joined as many clubs as possible and that was a help to me because my whole life had been structured.

“Some subjects have been difficult for me, like English which is why I came to an engineering school. But when I find a subject that is very passionate for me, it comes easy for me and comes naturally and it’s easy to do the work and go above and beyond. I found that industrial engineering was what I excel in. The teachers here challenge you every day. The teachers are fantastic.”

Doherty’s love for the game of soccer took hold at the age of eleven when she began playing for club teams and carried on to her high school days at Worcester Academy. She credits her parents for their support through the years for her and brother Riley, who is a member of the WPI men’s soccer team.

As a freshman, she started every game but admittedly was not a standout but more of a “team contributor.” That would change dramatically as her confidence, strength training and skill level grew. She knew that she needed to become stronger and faster to amp up her game and did so with tenacious discipline in the off-seasons.

This past winter, Doherty received a call from the WPI communications director and was summoned to his office for a meeting. She jokes saying she wondered what trouble she was in but the reasoning for the call was far from that. The decision had been made by WPI administration to nominate her for the Woman of the Year award. She was then required to submit a statement of qualifications and from there the waiting game was on.

“Being nominated for this award that recognizes me academically, athletically and with leadership, it’s a great way to end my career,” said Doherty.

Her academic achievements are no less impressive than her sports accomplishments. She obtained a degree in industrial engineering this spring and is continuing her education to receive a master’s degree in operations and analytics management from WPI. Doherty earned dean’s list recognition from 2013-2016 while she graduated with high distinction honors. She also received College Sports Information Directors Association (CoSIDA) Academic All-America honors in 2015 with All-District accolades in 2014 and 2015 and National Soccer Coaches Association of America (NSCAA) Second Team Scholar All-America recognition this past fall.

Hands-on projects are what she gravitates to, particularly those that can benefit others. She cites her participation in what is known as the “Interactive qualifying project” where she and 28 other WPI students traveled to Namibia for seven weeks to work with the African country’s train company to seek a solution to a rash of accidents and delays that were crippling the system. She and others analyzed data to determine causes and help to arrive at a solution to the problems.

Off the field and away from the classroom, she developed a deep spirit of giving back through community service. She participated in Big Brother / Big Sister, Colleges Against Cancer, Student Athlete Advisory Committee, Student Teaching Assistant and more.

“My sorority (Phi Sigma Sigma) is big on community service. I really enjoyed coaching the soccer team at the boys and girls club and found rewarding the sense of appreciation from staff and the kids.

“It makes giving back to the community meaningful when you see so much good is in it. I did Habitat for Humanity all through high school and that’s how I started. My parents grew up in Worcester so we have ties and we would do different events that we would help out in. High school had a lot of outlets and college even more so it just kept growing.”

Despite her WPI soccer days now being in the rearview mirror, Doherty intends to be active on campus and will attend games as often as possible. She admits to being somewhat nostalgic with the transition but would not change a thing from her four-year college experience.

“It’s sad seeing my competitive soccer experience come to an end but am definitely looking forward to the future to see what I can get involved in and see what I can push myself into,” she said. “I loved it here. I never looked back on my decision once. It’s been amazing because of the projects and group work.”

“It was a joy coaching Emily,” added Schafer. “She is someone that wants the best for her team and is willing to do what it takes to make a positive impact.” 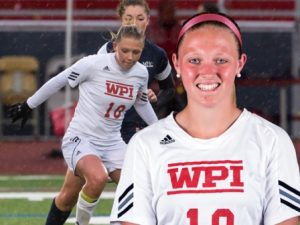