Northborough – In the introduction to “So Many Lives, So Many Stories” by members of the Northborough Senior Center Memoir Writing group, the group’s founder, Cathy Cairns, laments about never knowing her grandparents or what they were like. Of the book’s contributors, she wrote: “They have shared the ultimate gift with their loved ones – their lives. I am so thankful that these writers had the courage to look back and write it all down. For these priceless treasures, we should all be grateful.”

Compiled and edited by Pravin M. Trivedi and self-published through CreateSpace, the book celebrates those treasures. It does so through a wide range of heartwarming, poignant and humorous short memoirs. Coinciding with Northborough’s 250th anniversary and the 10th anniversary of the group, the recently released book will enhance the future of Northborough seniors as well. Its proceeds will be donated to the Friends of the Northborough Senior Center.

However, the book – which offers a fascinating glimpse into the past – almost didn’t see the light of day. Trivedi, the member who proposed the idea and organized the project, almost didn’t join the group, when he discovered he would be the only gentleman in a group of ladies. Fortunately, he overcame his hesitation and joined the group about a year ago. It didn’t take long for Trivedi, who had previously written and published three books, to become inspired to take the group’s memoirs to the next level.

“The more I heard stories from the members, the more I was getting convinced that they should be heard by a larger audience,” recalled Trivedi. “No one single person had published stories, and some of us were discussing if we could do it. The idea evolved and, after a hesitant start, gathered momentum.”

With the publishing skills and guidance of Trivedi, that momentum continued throughout the summer. Some members contributed several stories. Trivedi and other computer-savvy members typed stories for members who aren’t as familiar with computers. The contributors also wrote short autobiographical profiles, and storyboard artist John Forcucci provided illustrations. The group worked together to bring the book to fruition.

Carolyn Squillante, who has been a group member since 2006, wrote five stories. In one, she recounted childhood memories of Cedar Hill Road. Growing up on a farm on the side of Mount Assabet, she fondly remembers what the road used to be – “a field of trees, stonewalls and wetlands.” The story gives readers a tour of what the place was like before it became a residential neighborhood.

“Being part of the book, I enjoyed sharing my memories growing up in Northborough and also hearing others’ stories of their lives,” said Squillante. “In sharing our stories, we relive the experience and come to appreciate the many things we took for granted.”

Diane Guldner, another member who has been part of the group since 2006, contributed two stories.

“Of the two stories I put forward to be included in the memoir group’s book, the one about life changes as traced from year to year will be the one I hope resonates most with the readers…” shared Guldner. “With Pravin’s guidance, the book of stories from the memoir group is a reality which pleases me, and it is dream come true for the group.”

But Trivedi’s guidance isn’t the only thing he contributed. The former engineer and teacher also wrote three stories. The one he enjoyed writing the most is a humorous recollection of a family trip to a grocery store in Agawam. When he asked to borrow a cart to get their groceries home – since they didn’t have a car – a cashier, manager and security guard misunderstood their intentions.

There are other stories that are also set in different towns, states and countries. The memories of Northborough natives are brought to life along with those of immigrants and refugees. But despite their cultural differences, the writers share a common enthusiasm for the project.

Trivedi hopes this enthusiasm will inspire and help others.

“I hope the readers would be encouraged to write their own stories and get them read by others,” said Trivedi. “Hopefully, the sales will benefit the Friends of the Senior Center to increase other similar activities at the center.”

“So Many Lives, So Many Stories” can be purchased through www.Amazon.com. 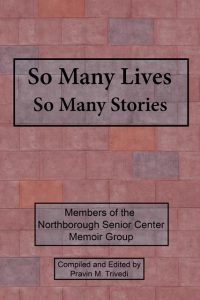