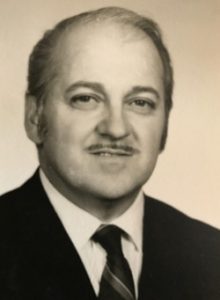 Shrewsbury/Westborough – Vincent T. Dagostino, 93, passed away Tuesday, Dec. 6, 2016 with his loving family by his side. He lived out his final days peacefully at the Beaumont Rehabilitation and Skilled Nursing Center in Westborough.

Vin was one of eight children to Frank and Catherine (Cataldo) Dagostino. His parents emigrated from Italy and raised their family in Worcester. After graduating from Commerce High School, Vinny advanced his education to pursue a career in accounting.

After school, he was drafted into the military and served in the Army Air Corps during World War II from 1943-1946. Tech Sergeant Dagostino engaged in the China Offensive and Defensive, India Burma and Central Burma. He received the Asiatic Pacific Theater Campaign Ribbon, the American Theater Campaign Ribbon, the Good Conduct Medal and the Victory Medal for his dedicated service to his country.

When he returned home, Vin married the love of his life, Maria Jo Caramello, on Nov. 9, 1946. The two celebrated 70 years of marriage last month. “Jim” and “Jo” were inseparable.

Vin worked in accounting for many years until his retirement in 2005. He also served as a notary public. Daily crossword puzzles aside, his chief hobby was woodworking. He took great pride in building toy chests and replica boats for his grandchildren.

Vin was a resident of Shrewsbury for 50 years, and was a loyal parishioner of Saint Anne’s Church.

The Dagostino family would like to extend their deepest gratitude to all the staff at Beaumont Nursing in Westborough for the outstanding and wonderful care they gave Vinny in his time of need.

Services for Vincent will be held Friday, Dec. 9 from the Mercadante Funeral Home & Chapel, 370 Plantation St., Worcester, with a Mass at 11 a.m. at Saint Anne’s Church 130 Boston Tpke., Shrewsbury. Burial will follow in Mountain View Cemetery of Shrewsbury. A period of calling hours will be held Friday, Dec. 9, from 9-10 a.m., in the funeral home prior to departure for his funeral Mass.

In lieu of flowers, kindly consider donations being made in his memory to St. Jude Children’s Research Hospital, 501 St Jude Place, Memphis, TN 38105.

To share your thoughts, memories and prayers with the Dagostino Family, please visit Vincent’s personal guestbook at www.mercadantefuneral.com.