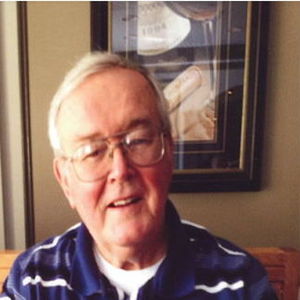 Peter was born July 29, 1935 in Sheffield, England to Arthur and Lena (Riding) Stott. He lived in England until the age of 12 when his family relocated to Montreal, Quebec, Canada. He graduated from Lachine High School in Lachine and later McGill University, in Montreal.

Following his graduation from McGill, Peter began a career at Sun Life of Canada which lasted for 31 years. In 1973, a promotion with the company included relocating to the United States and the Stott family settled in Marlborough. He retired in 1991, and for many years divided his time between Sandwich and Jensen Beach, Fla., before moving to Hudson.

Peter was an active member of the First Church in Marlborough, Congregational, where he served many roles through the years, including deacon, chairman of the church counsel, chairman of the search committee, stewardship program and was a founding member of the bell choir. He enjoyed golf, playing pool and spending time with his family and friends.

Peter is survived by his loving wife, Marlynn (Ayers), to whom he had been married for the past 56 years; his daughter, Cheryl Hopkins and her husband Bryant of Milford; and his sons, Greg Stott and his wife Tammy of Westborough and Jim Stott and his wife Jennifer of Franklin. Peter will also be missed by his 11 grandchildren; his sister, Anne Higgins, and his brother, David Stott, both of Ontario; and his numerous friends from Hudson and Florida, especially Dick Carlson, Roger Montgomery, Charlie Bosio, and Larry Bennett.

Visiting hours will be held Monday, Feb. 13, from 9:30-11 a.m., at the First Church Congregational, 37 High St., Marlborough. A funeral service, in celebration of Peter’s life, will follow at 11 a.m. Burial will be held at a later date.

In lieu of flowers, donations may be made to the Michael J. Fox Foundation for Parkinson’s Research (www.michaeljfox.org) or the Brain Injury Association of Massachusetts (www.biama.org).

Arrangements are under the direction of the Slattery Funeral Home, Inc., 40 Pleasant St., Marlborough.