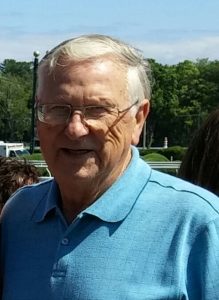 Charlie was born July 29, 1933 in Worcester, son of the late Mary (Larkin) and Charles H. Peterson Sr. He grew up in the Vernon Hill neighborhood in Worcester and settled in Grafton with his wife Beverly, where they raised their family.

Charlie worked at Wyman Gordon in Grafton for 61 years, most recently as Director of Security and was also a Sealer of Weights and Measures in Grafton.

Away from work, Charlie and Beverly looked forward to camping trips across New England and to Florida, and during the winter he enjoyed an afternoon on a snowmobile trail. Friends of Charlie’s will also recall seeing him walk around his neighborhood often or on occasion see him pass by on his moped.

When his sons were younger he was a loyal supporter of youth hockey in Grafton and helped to fundraise with the Sideline Club.

In lieu of flowers, please honor Charlie with memorial donations to The American Diabetes Association, PO Box 15829, Arlington, VA 22215 or online at www.Diabetes.org.

All are welcome to a funeral Mass for Charlie, to be held Thursday, Feb. 23, at 10:30 a.m., at St. Mary’s Church, 17 Waterville St., North Grafton. He will then be laid to rest at Pine Grove Cemetery in North Grafton.

A Book of Memories for Charlie to share a story, memory or message of sympathy with his family is available online at www.RoneyFuneralHome.com.