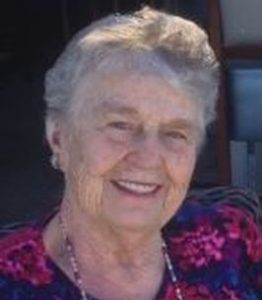 Shrewsbury – Shirley (Shipman) Badgley, of Shrewsbury, died Wednesday, Feb. 15, 2017, in the care of the Rose Monahan Hospice Residence of Worcester, surrounded by her family. She was the beloved wife of the late Robert G Badgley, with whom she shared 61 years of marriage. Family meant everything to Shirley, including friends who she considered family.

She was born Aug. 16, 1928 in Pittsburgh, Pa., the daughter of the late J Ellis and Ingeborg Shipman. She grew up in Philadelphia and then attended Edinboro State College in Pennsylvania, where she met her husband. Shirley and Bob spent over 30 years living and raising their children in Shrewsbury.

Upon retirement, Shirley and Bob moved to Jupiter, Fla. and then Indiantown, Fla., where they enjoyed many years of golfing, playing bridge, and enjoying good times with family and friends. After Bob’s death in 2007, Shirley moved back to Shrewsbury to be closer to her family.

The family wishes to thank Dr. William Walsh and Dr. Jesse Aronowitz at UMass Memorial Hospital in Worcester for their compassionate care and all of our supportive friends.

All are invited to attend a memorial service in celebration of Shirley’s life Friday, Feb. 24, at 10 a.m., at Trinity Episcopal Church, 440 Main St., Shrewsbury. There are no calling hours. She will be laid to rest in Mountain View Cemetery of Shrewsbury.

In lieu of flowers, donations may be made to the Trinity Episcopal Church Memorial Fund, 440 Main St., Shrewsbury, MA 01545 or to the charity of one’s choice.