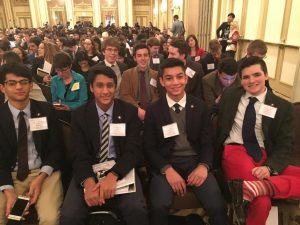 The club has built a great relationship with the University of Chicago and has been recognized for its proficiency in MUN. Delegates participated in 22 different committees covering pressing topics in today’s world, as well as in an historical context, including the United Nations Security Council, NATO, the Cabinet of Russia (2004), International Criminal Police Organization, and World Cities Summit. Eleven Saint John’s delegates received awards at the conference.