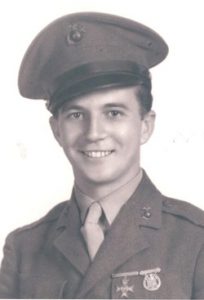 Francis is survived by his wife of nearly 71 years, Irene A. (Szydlowski) Brisebois; three sons, John F. Brisebois of Shrewsbury, David F. Brisebois and his wife Linda of Hubbardston, and Mark F. Brisebois of Houston, Texas; 13 grandchildren; eight great-grandchildren; and many nieces and nephews. He was predeceased by his siblings, William Brisebois, Emily Cote, Maryrose Allaire, Lucille Habib, Irene Campbell, and Diane Brisebois.

Francis was born in Leicester, son of the late, William and Florida (Dupre) Brisebois.  He served his nation proudly as a United States Marine during World War II.

Francis worked as a scheduler in the heat treat department at Wyman Gordon Company for 36 years, before he retired in 1988.

He was a member of Saint Anne’s Church in Shrewsbury and served as a Eucharistic Minister. He belonged to the Knights of Columbus and volunteered for over 20 years with the Mustard Seed.

A funeral Mass for Francis will be held Saturday, April 1, at 10 a.m., in Saint Anne’s Church, 130 Boston Tpke. (Route 9 East), Shrewsbury. There are no calling hours.  Interment will be held privately.