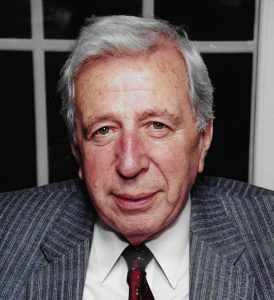 Joseph was born Oct. 22, 1925 in Belaya Tserkov, Ukraine, a son of Moisey and Beila (Schwachkin) Tonkonogy. When he was 16 years old, Germany invaded the Soviet Union, and his family had to evacuate to Uzbekistan. The day after they evacuated, a German bomb destroyed their home.

During evacuation, young Joseph graduated high school two years earlier than his contemporaries and became a student at Leningrad Military Medical Academy, as this institution was also evacuated to Uzbekistan. Soon after the siege of Leningrad was over, the Academy returned to Leningrad, and Joseph continued his medical education there.

While a student at the Academy, he became very interested in the workings of the human brain, and devoted the rest of his long career to its study. He graduated the Military Medical Academy in 1947, and joined Soviet armed forces in Berlin in the rank of Captain of medical services. After returning to civilian life, he began his illustrious research and teaching career at Bekhterev Institute of Psychoneurology in Leningrad (now St Petersburg), completing a PhD and becoming a Professor.

Dr. Tonkonogy published numerous articles, wrote and edited several books, was one of the founders and creators of a new subspecialty called Medical Psychology in Russia, and Neuropsychology in the U.S., in close collaboration (and fierce competition) with well-known Soviet neuropsychologist Alexander Luria. He had no other hobbies but his work. He used to joke, “My work is my well paid hobby.”

In 1973, he met his second wife Ludmilla on a blind date. In 1979, he and his new family made the decision to leave the Soviet Union amidst strong anti-Semitic propaganda and severe governmental restrictions on travel and participation in the international scientific community.

Dr. Tonkonogy was the highest ranking scientist to ever leave Leningrad, but he received support from his many colleagues in other countries, for which he was eternally grateful. However, there were many obstacles in his journey to establish himself in a new country professionally, and many skeptics who gleefully predicted his failure. One of these people was a little man, a supervisor at New York Association for New Americans, who reviewed Joseph’s credentials and said, “You may have been a professor and a doctor in Russia, but here you are ZERO!” Joseph just shrugged his shoulders and said quietly, “We’ll see.”

He then proceeded to pass all qualifying examinations and within two years was practicing medicine and participating in research. He became a full professor of Psychiatry and Neurology at UMass Medical School, and for the next 20 years taught Neuropsychiatry to innumerable students and residents. He published many articles and wrote two more books, the latest book was published in 2009, the year he retired from UMMS. He also ran a private clinic for Russian immigrants in Brighton, where he was loved and cherished by his patients.

Family and friends will honor and remember Dr. Joseph Tonkonogy by gathering for calling hours Thursday, April 20, from 4-7 p.m., at Hays Funeral Home, 56 Main St. in Northborough, followed by a memorial service at the funeral home Friday, April 21, at 10 a.m. Burial will follow at Pine Grove Cemetery in Westborough.

In lieu of flowers, gifts in memory of Joseph may be made to the University of Massachusetts Memorial Foundation (UMMF) in support of its neuropsychiatry residency training program. Gifts can be made online at www.umassmed.edu/give or mailed to the Office of Advancement, 333 South St., Shrewsbury, MA 01545. Checks should be made out to UMMF and note that the gift is in memory of Dr. Tonkonogy.