Shrewsbury – There are jumps, rollers, drops and cambered turns spread across both flat and steep sections where riders strain to keep in control while traveling at breakneck speed. Mid-race collisions among competitors are not uncommon, nor are spills in a specifically designed narrow and challenging course that provides just that and then some.

Few who are involved in competitive boardercross snowboarding will disagree that this is not a sport for the faint of heart or for leisurely passing the time on nights and weekends. Few are up for such an extreme challenge, but one area rider who is and has taken on some of the best with great success is Shrewsbury High School (SHS) junior Allie Hogan.

Hogan’s accomplishments would seemingly eclipse those of others at her young age and are extraordinary and remarkable all at the same time. She recently returned from USASA (USA Snowboard and Freeski Association) National Competition at Copper Mountain in Colorado where she finished in fifth-place in her age group. Hogan also competes on the Wachusett Mountain team and at many local races throughout the winter where she has placed first multiple times. In her free time she both snowboards and instructs at SkiWard in Shrewsbury where she has taught many from age six upward on how to master this oftentimes grueling sport.

Hogan was introduced to snowboarding by her dad at age seven and has never looked back. She began competitive racing as a freshman and took her skills to many area mountains including Wachusett, Stratton and Sugarloaf where she finished tops in her age group on many occasions. Her area success boosted her countrywide ranking to 17th which allowed her to qualify for the main event in Colorado. While the trip with her dad and a close friend was extraordinary, so was the competition at the national level, she admits.

“The competition was a lot more competitive compared to around here. Everyone was a lot faster. You could tell right off how much faster and stronger the riders are. It snowed almost every day I was out there so we got to ride a lot more powder which we don’t get to do a lot around here so that was pretty cool.”

Still, the inherent dangers of the sport have not passed her by as she has experienced her share of significant injury over the years and yet Hogan, while cautious, manages to shake it off and return to competition. Helmets and other protective gear help some but can’t entirely mask the intrinsic risks that the sport entails.

“Freshman year I broke my shoulder and snapped my humerus in half,” she said. “Racing can be dangerous because there’s four of us on a small path racing down at once. Crashes happen all the time but you get back up. I hurt myself going off a jump once. I overshot it and landed in the flats. Hitting jumps gets me a little more scared than I used to be but I’m still pretty used to it by now.”

When not snowboarding or instructing, Hogan spends her time among friends and family and also competes on the Shrewsbury High girls’ varsity lacrosse team. She is quick to give credit to her coaches Charlie Rabe and Nick Cravedi for helping her sharpen her skills that have allowed her to take things to a high level that will hopefully result in her return to national competition.

“Once you learn the basics it’s pretty easy to improve through practice,” Hogan explained. “I hope to compete a lot around here and hopefully I’ll get to go to nationals again. The sky’s the limit.” 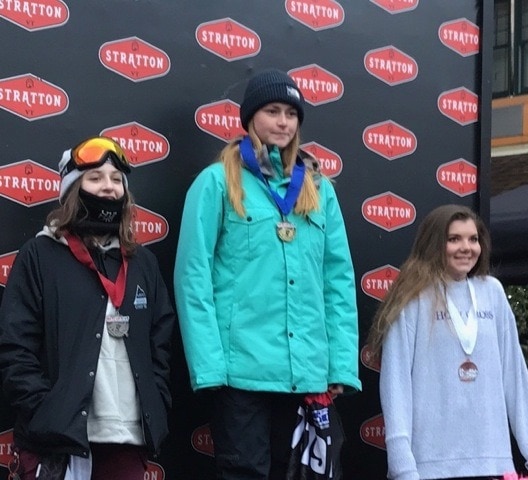