Grafton – Ten thousand of Grafton’s residents hold library cards, according to Beth Gallaway, who has been the Grafton Public Library Director since 2013.

For the third time, the Grafton Library Planning and Building Committee is attempting to gain approval for an expansion. Joining many other libraries in Massachusetts that have gone through this process, a grant application has been submitted for partial state funding through the Mass. Public Library Construction Program Grant.

The cost for the proposed 26,000 square feet library is $16.6 million. Voters must approve the expansion request first at Town Meeting and then via a ballot vote.

“At Town Meeting on Monday, May 8, 7:30 p.m., at the Grafton High School, there will be a vote to approve a preliminary design and financing,” Gallaway said. “About half of our library’s cardholders are adults, and we hope they will turn out to support the expansion at Town Meeting, and later at the polls.”

“If at Town Meeting, a majority of those in attendance approve the preliminary design, and two-thirds approve the financing, residents will vote again on the financing issue at Grafton’s Tuesday, May 16 general election. A majority vote on this ballot item will be required to move ahead. If that vote fails, the Board of Selectmen’s request can be brought back to semi-annual Town Meeting in October 2017,” she added.

If the project is approved by the voters this spring, town officials should hear if they are approved for state funding on Thursday, July 13.

“We believe that it will reimburse $6.6 million of the total cost,” Gallaway said.

“We hope to raise another $2 million through a capital campaign. That will leave $8 million, which would be funded by a debt exclusion tacked onto taxes for 20 years. That should add from $80 to $150 a year to resident’s taxes,” she added.

Drummey Rosane Anderson Inc. (DRA), an architectural firm that specializes in historic restoration, and has designed 70 other libraries, has developed the preliminary design. The design meets state and federal requirements, as well as the 20-year projections for Grafton’s population, as required by the grant application.

The proposed 25,987 square feet building expands the footprint of the library and parking behind the building’s 35 Grafton Common location, using a portion of two empty lots owned by the town, now deeded to the library. It maintains the front façade and barrel vaulted ceiling of the current main room of the Colonial Georgian library.

Within the new space, there will be improved accessibility, data and communications, lighting, acoustics, shelving, and furniture. There will be an elevator, efficient heating and cooling, and a meeting room with 117 seats.

When Gallaway accepted the directorship at the Grafton Library, she said, “My goal was to turn this library into a 21st century library, with popular materials and popular culture programming.”

Within a short time, she has dramatically improved both the offerings and the morale of the staff.

“They are not afraid to get their geek on. They’ll dress up in costumes that relate to books or pop culture programming, and connect with fandom,” she said.

Borrowers, visitors, circulation, programs, and program attendance have increased annually over the last four years, according to Gallaway.

Gallaway summed up the library as a place that contributes back to the community. She and the library planning and building committee hope that the town members see that as well, and support the expansion.

A final community forum for questions and feedback is scheduled for Saturday, April 29, at 2 p.m. at the Grafton Public Library. For more on the project and to offer feedback, visit graftonlibrary.org/thetimeisnow. 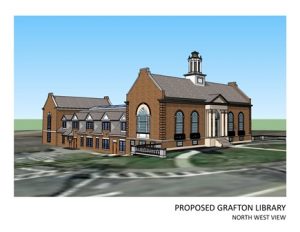 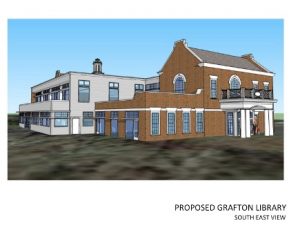 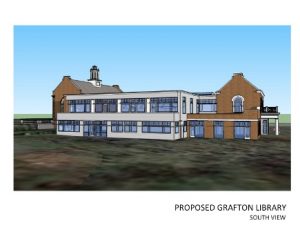 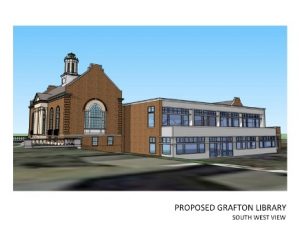 Albert A. Cardin, 93, of South Grafton