Hudson – From the outside, Feng Sushi & Grill looks like most other Asian restaurants, tucked in a mini strip mall next to a Honey Dew Donuts on a main thoroughfare in Hudson. Once inside, however, Feng will introduce the visitor to the freshest Japanese cuisine, prepared with unique and bold flavors.

Hudson resident and chef Joe Lin opened Feng seven years ago to fill a void in the area.

“The reason I came here is that there is not a big market,” he said. “When we opened we focused on getting the freshest and best fish. People deserved better fish.”

Since opening, Hudson has become much more bustling and the location now gets much more traffic, which is great for business.

Lin went to culinary school in China and studied hotel management, but that wasn’t his goal when moving to the United States.

“I first planned to go into computers,” he said, noting the idea to open a restaurant came later.

His uncle owned Chinese and Japanese restaurants, so he helped Lin get started. However, learning how to choose the right – and freshest – seafood for sushi was something he had to learn on his own.

“I did research,” he explained, “and talked to people at the market and the fishermen to become confident of the quality and freshness.”

He also learned to use different types of fish depending on the season, ensuring that Feng always serves the freshest fish for that time of year.

Feng also has a super freezer that keeps the food at 75 degrees below zero which helps maintain freshness.

Lin and his team have crafted an extensive menu of traditional Japanese sushi choices, as well as their own creations.

The menu features 12 House Signature Rolls, including the Crazy Sake Roll, the Lobster Bomb Roll, the Outstanding Roll and the Sweetheart Roll. The Feng Roll is a deep-fried lobster, asparagus, cream cheese and caviar roll topped with avocado, scallions and taro. The popular Hudson Roll is a deep-fried tempura shrimp roll topped with chopped toro, fresh jalapeno and caviar.

It might seem unusual to mix sushi with jalapenos, an ingredient more associated with Mexican dishes. Lin adds Latin American flair in other dishes as well, with ingredients such as chili pepper and tequila.

“In Japan, they use wasabi, because there is no chili pepper, but chili pepper combines well with Japanese food,” he said.

“A lot of sushi restaurants use sauce in packages,” he said. “That’s like buying it at the grocery store. We wanted to avoid that.”

In addition to the Special Rolls, the menu includes a wide selection of appetizers. Two of Lin’s favorites are Tuna Cilantro, fresh tuna topped with chopped mango, cilantro and caviar in a citrus miso sauce, and Madai with Truffle, white fish topped with dry crabmeat, wasabi sprouts, garlic cheese, guacamole and truffles. He also recommended the oysters, either from local sources or Japan, that are brought in each week in limited quantity. They aren’t on the regular menu. The current daily menu features a pair Japanese oysters with two sauces, an orangey sauce and a “secret sauce” with tequila.

“Make sure to ask for them if you don’t see on the daily specials menu,” he suggested.

The 60-seat restaurant has a sushi counter to watch your food as it prepared in front of you and a brand-new bar.

The bar offers a menu of signature drinks, that Lin and his bartender created – the Casanova, Cassis Collins, Lychee Martini, and, of course, the Mai Tai.

“It took one week to perfect our Mai Tai recipe,” Lin said, adding that as in all Feng’s cocktails, the Mai Tai is made with fresh-squeezed juice.

“Our bartender really knows his stuff,” Lin said. “He has a passion to learn and create new drinks.”

Feng also imports liquor from Japan – Saki and whiskey and vodka, which is made from barley and sweet potato.

Feng Sushi & Grill is located at 191 Washington St., in Hudson. For hours and information, call or visit www.fenghudson.com. 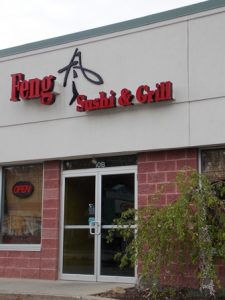