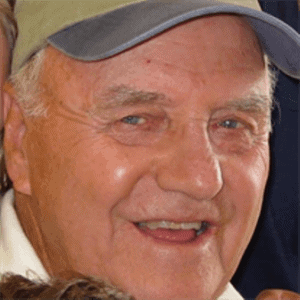 Shrewsbury – Robert A. Martel died under comfortable conditions, surrounded by family and love, Saturday, April 29, 2017, just two days before his 90th birthday. He was the beloved husband of the late Thelma (Puls) Martel to whom he was married for 62 years.

He was a U.S. Marine on a troop ship in the pacific when WWII ended. Following a few years with for Cranston Print Works in Webster, he was a marketing and sales executive for the Jamesbury Corporation his entire career.

Bob loved sports and competition and proved to be quite an athlete over the years. He was a triathlete playing football, baseball and basketball in high school and in college. Later in life Bob took an interest in swimming, golfing, bowling, bocce and tennis. He even became the league organizer for the Shrewsbury Tennis Club.

Not only was Bob an athlete, but he had a flare for entertaining and he was often known to grab a microphone for a song. For 45 years, he sang with the St. Mary’s Church Choir.

He had many friends and social groups, meeting nearly every day at 10 a.m. with the the cantankerous gentlemen of “Roger’s Café” in the Shrewsbury Senior Center where he would visit every morning to exchange tales and each other’s life gifts over coffee or lunch. He enjoyed the friendship of all his neighbors through years of parties, block-parties, town festivals, taking kids to parks or simple meals. He was an active member of the Shrewsbury Knights of Columbus, Adelphi Council #4181, as he was a member of the Wednesday night Bocce league and was also part of Friends of the Library, and the Greendale Retired Men’s Club.

Bob cherished nothing more than his family. He was the youngest of three children, a terrific dad, and a loving husband. He enjoyed spending time with his sons and tremendously enjoyed his wife Thelma’s exceptional and unreplicated cooking. Bob approached his whole life and all who he met with a terrific smile, humility, interest, and humor. His jovial attitude and love of life will be greatly missed by many.

He is survived by his sons, Michael Martel, Lt. Col. USAF (Ret.) of New Braunfels, Texas and Matthew Martel and his wife Maria “Rona” of Connecticut. He is also survived by his three grandchildren, Brendan, Emma, and Nolan, and his sister, Doris Canty of Webster. He was predeceased by his brother, Edger Martel.

Relatives and friends will gather Saturday, May 13, at St. Mary’s Church, 640 Main St., Shrewsbury, with his funeral Mass to be celebrated at 10 a.m. A reception celebrating Bob’s life will follow at The Sumner House, 5 Church Rd., On the Common, Shrewsbury Center. Burial will take place at the convenience of the family at Sacred Heart Cemetery, Webster.