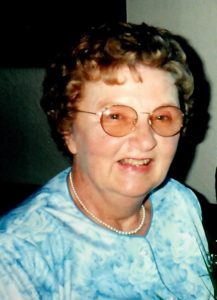 Westborough – Bernice A. Joslyn, 86, of Westborough, passed away peacefully Monday, May 8, 2017, at the Maine Medical Center in Portland, Maine. She was the wife of the late Alvin C. Joslyn Jr., who passed away in 2012.

Born in Greenfield, she was the daughter of the late Leon and Gladys (Graves) Rose and a graduate of Amherst High School.

Before her retirement, Mrs. Joslyn was a paraeducator for the Westborough Public Schools.

She was a member and Past Worthy Matron of Bethany Chapter 13, which merged into Rachel Chapter NO. 61, Order of Eastern Star. She was also a longtime Mother Advisor to the Westboro Assembly #67, International Order of Rainbow for Girls.

Mrs. Joslyn enjoyed spending winters in Ormond-By-The-Sea, Fla. She was an avid Red Sox and Patriots fan who enjoyed camping, hiking, and fishing and loved to garden and knit. She enjoyed driving her dark grey Ford Mustang convertible, which she received on her 75th birthday. In recent years, she became adept at using Facebook, which kept her in touch with all her family. Whether she was in Massachusetts or Florida, she remained an active participant of Water Aerobics at the Y.M.C.A. Spending time with her grandchildren and great-grandchildren was always a priority for her.

She is survived by her four children, Melvin Joslyn and his wife Nancy of Alfred, Maine, Kenneth Joslyn and his wife Laura of Shrewsbury, Alvin Joslyn III and his wife Brenda of Vero Beach, Fla., and Patricia Rouleau and her husband Roger of Newbury, Vt.; nine grandchildren, Keith, Kilee, Doug, John, Mark, Daniel, Casey, Timothy and Holly; six great-grandchildren; and many nieces and nephews. She also leaves behind three siblings, Barbara Boulden, Kenneth Rose, and Janet Burt. She was the sister to the late Clarence Rose, Eleanor Miller, Shirley Stevens, Norman Rose, and Floyd Rose.

Her funeral service will be held Friday, May 12, at 1 p.m., in the First Congregational Church of Sunderland, 91 South Main St., Sunderland, and will be officiated by Reverend Barbara Seamon. Burial will follow in North Sunderland Cemetery. Calling hours at the David A. Pickering Westborough Funeral Home, 62 West Main St., Westborough, are Thursday, May 11, from 4-7 p.m.

In lieu of flowers, donations in her memory may be made to the American Heart Association/American Stroke Association, PO Box, 417005 Boston, MA 02241-7005.   (www.donatenow.heart.org).