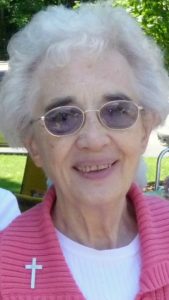 Marlborough – Sister E. Lorraine Bilodeau, a Sister of St. Anne, known in religion as Sr. Lena Marie, died Tuesday, May 16, 2017 at Marie Esther Health Center. Sister Lorraine was in the 82nd year of life and the 62nd year of her vowed religious life.

She was the daughter of the late George and Lena (Laflamme) Bilodeau of Holyoke. She completed her elementary education at the former Precious Blood High School, in Holyoke and received her high school diploma from the former St. Anne Academy in Marlborough. Sister held a BS degree in Education from Catholic Teacher’s College in Providence, RI, an MA degree in Religious Education from Fairfield University in Ct. and an MLS degree in Library Science from Rosary College in River Forest, Ill.

Sister Lorraine joined the Sisters of St. Anne in Marlborough in 1954 and she pronounced vows in 1956. For more than twenty years, she taught at the elementary and middle school level in schools staffed by the Sisters of St. Anne in Worcester, Central Falls, and Manville, R.I. She served as Director of Religious Education at the Religious Education Center in Central Falls, R.I. and at St. Leo the Great Parish in Pawtucket, R.I.  In her later years, Sr. Lorraine served as a cataloger, media librarian and head librarian at Anna Maria College, Paxton.

Sister Lorraine is grieved by her Sisters of St. Anne community; her nephew, Gary Bilodeau; and extended family members. She was predeceased by her two brothers and a sister.

A memorial contribution may be made to the Retirement Fund of the Sisters of St. Anne or to a charity of your choice.