Region – Worcester Academy senior and Hopedale resident McKenzie Fahey will be taking a trip to South Africa with the nonprofit group, Universal Promise June 16 to July 1. She is very excited to experience volunteerism and meet the residents of the community known as Adeppo.

“I hope to contribute some change for the people who live there,” McKenzie said. “They have so little and we have so much, which I feel like, at times, we take that for granted. I hope to spread some of the knowledge that I have and help in any way that I can.”

There will be about eight to 10 students participating in this organized trip. Three adult volunteers as well as the program’s president, Martha Cummings, will also be going. Cummings is originally from Southborough and now resides in Rhode Island. This will mark the fifth trip of its kind and has truly been making a positive impact on the people and the communities that it reaches.

“My sister-in-law has been on a trip through Universal Promise and it changed her life. I was hesitant to allow my 16-year old-daughter go but I know it will be an amazing experience for her. The days are very structured and these volunteers make a big impact on the community,” explained McKenzie’s mother Ann Fahey. Cummings is Ann’s sister-in-law’s cousin.

Universal Promise is not affiliated with any religious organizations and relies on the generous donations and support of contributors.  It began with a 50th birthday for Martha in South Africa with the intention to go on a safari in the Addo Elephant National Park with a tour of the country. She met a waiter named Moses and felt a connection. Wanting to see, firsthand, how apartheid was still present in the schools and the society, she asked him to take her to his township. After getting permission to take her, Martha, a lifelong educator, was already putting a plan in motion for Universal Promise to be born.

“We all know some things in life cannot be understood until we face them ourselves; the death of a parent, the birth of a child. The chasm between anticipation and reality is as great as the chasm between a raindrop and a hurricane. For that reason, I can’t convey what I saw that day. Suffice it to say, though, that it was shocking enough yet changeable enough that a trip in celebration of my first 50 years turned into a trip that will last forever,” said Cummings. 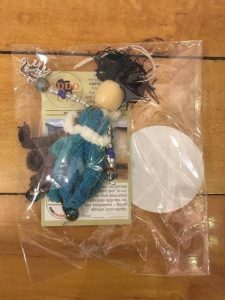 There are three separate initiatives that the students like McKenzie will be engaging in. They are Teaching and Education, Medical and Healthcare and Career and Financial Empowerment.

McKenzie already knows that she will be volunteering to support the medical program. She will be working closely with Suzanne Ragonese, who will be the head of the Medical and Healthcare Initiative and is a nurse practitioner from Hopedale.

“Many of the people that we will be meeting with don’t have access to checking their blood pressure or blood sugar levels. I hope to support Suzanne with whatever she needs help with. I also hope to inspire many to go to the clinic as their health is very important and can’t be overlooked,” said McKenzie.

Residents of this community face malnutrition, life threatening illnesses, lack of clean water, minimal or no transportation and more.

For more information or to donate, visit www.universalpromise.org.