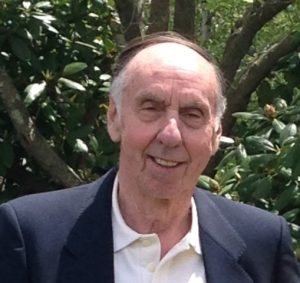 He leaves his wife of 62 years, Nancy A. (Aulizio) Sulminski; two daughters, Debra Sullivan, her husband David and their children Megan & Matthew of Sutton, and Janet Mangano, her husband William and their children Nicolas and Ryan of Grafton and grandson Jack O’ Brien and his father Kevin of North Attleboro, Paul’s son-in-law, husband of his daughter, Diane G. (Sulminski) O’Brien, who predeceased her father. Paul also leaves several nieces and nephews. He was predeceased by his sister, Helen Murawski of Webster, and his brother, Charles Sulminski of Oxford.

Paul was born in Worcester and raised there by his parents, Frank and Blanche (Katzmarek) Sulminski. He attended St. Mary’s Catholic School and then graduated from Commerce High School. He enlisted in the U.S. Marines and was a veteran of the Korean War.

Following the war, he began his career at New England Telephone & Telegraph, ultimately retiring from Verizon after 44 years.

Paul was an active parishioner of Our Lady of Czestochowa in Worcester and then St. Mary’s Parish in North Grafton when they moved to raise their family. He was an avid sports fan and passionately followed all the Boston sports teams. He enjoyed attending many of his grandchildren’s athletic events. He and his family had many memorable road trips.

He and his wife enjoyed traveling and in particular their pilgrimage to Vatican City. He was a member of the Telephone Pioneers of America, the affiliated Local I.B.E.W. and the Polish American Veterans in Worcester.

In lieu of flowers, memorial donations in honor of Paul Sulminski may be made to The Boys and Girls club of Worcester, 65 Tainter St., Worcester, MA 01610.

All are invited to join his family at calling hours Sunday, July 30, from 2-4 p.m., at the Roney Funeral Home, 152 Worcester St. (Routes140 & 122), North Grafton. The funeral will be Monday, July 31 with people gathering at the funeral home at 9 a.m. before taking Paul to St. Mary’s Parish, 17 Waterville St., North Grafton, to celebrate his Mass of Christian Burial at 10 a.m. He will then receive the Catholic Rights of Committal and USMC Funeral Honors at Notre Dame Cemetery/Mausoleum, where he will be entombed.

An online guest book to share memories and condolences is available at www.RoneyFueralHome.com.