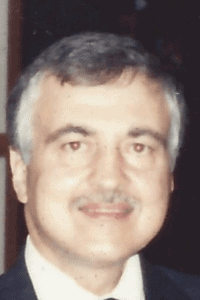 Hudson – Richard A. Lefebvre passed away on August 12, 2017, after a life long struggle with Muscular Dystrophy. As were his wishes, he was at home with his family around him at the time of his passing.

Richard went by many names: Dick, Hap, Richie, Husband, Dad, and his very favorite Pa. The name Pa was given to him by his three cherished grandchildren.

He is survived by his wife, Linda (Kompel), and his daughter, Amy Peterson, her husband Chris and his three gifts, Max, Natalie and Brett. He also leaves behind his brother-in-law, John Kompel and his wife Elaine, and two nephews, Johnny and A.J. Kompel. He was predeceased by his parents, Eli and Lorraine (Klick) Lefebvre, and his in-laws, Betty and Bill Kompel. Also arriving in heaven before him was our angel, Olivia.

Hap started his professional career as an Auditor for Blue Cross and Blue Shield and soon became Chief Financial Officer of Milford Hospital. After that, he managed hospitals in Massachusetts, New Hampshire and Maine for Hospital Corporation of America (HCA), and finally advanced to District Vice President of Quorum Health Management Co. from which he retired at an early age due to his declining health.

The family wishes to thank Janine, Michelle and Ruby of VNA Hospice, for their kindness and great care in his last days.

Hap served on many Committees including the Board of Bay Path Regional School Committee, a founding father of the FHS Society and became a fellow in the Hospital Financial Management Association.

Calling Hours are Wednesday, August 16, from 9:30-11 a.m., on at TIGHE HAMILTON REGIONAL FUNERAL HOME, 50 Central St., Hudson. A funeral service will immediately follow at 11:30 a.m. in the Church at the funeral home, followed by a procession to Saint Michael’s Cemetery in Hudson for final Committal Services.

In lieu of flowers, memorial donations can be made in his name to FSH Society, 450 Bedford St., Lexington, MA 02420 (www.fshsociety.org).